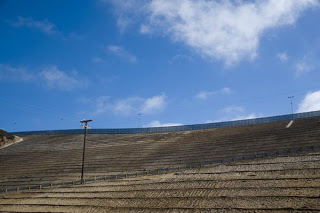 A Barren Promise at the Border

Had anyone else built this hillside near the U.S.-Mexico border, it would look nothing like it does. The barren hill would be alive with native plants, the earth would be solidly rooted and not a threat to tumble down into the Tijuana Estuary, a lush, 2,500-acre salt marsh that starts 600 feet away.

But along the newly constructed border fence near the Pacific Ocean in Border Field State Park, inch-thick tan clumps of seeds and mulch still blanket the ground. They haven't been watered, so no plants have grown.

Were it anyone else's project, state regulators would've required irrigation to ensure that plants grew. But the federal government is responsible for the $59 million effort to complete and reinforce 3.5 miles of border fence separating San Diego and Tijuana. The Department of Homeland Security exempted itself from eight federal laws and any related state laws that would have regulated the project's environmental impacts.

Because the project is exempt from the federal Clean Water Act, state water regulators have no jurisdiction.

Homeland Security officials sought the waiver power in 2005 to accelerate fence construction in San Diego and across the Southwest, saying that national security needs trumped environmental concerns. That power has accelerated construction from San Diego to Brownsville, as the agency has waived laws across 550 miles of the border. To date, 633 miles of fence have been built at a cost of $2.4 billion.

The department made the same promise each time it waived laws like the Clean Water Act and Clean Air Act: Though we're now exempt from federal and state environmental regulation, we're still committed to the environment.

But as construction continues across the Southwest, the project's impacts in Border Field State Park and in another federal reserve further east raise questions about the sincerity of the government's commitment.

Clay Phillips, the California State Parks superintendent who oversees Border Field and the estuary, said that promise hasn't been fulfilled there. Mitigation of the fence's environmental impacts has "failed miserably," Phillips said.

Phillips worries that winter rains will wash soil off the hills into the nearby estuary he oversees, which is home to several sensitive species and already filling with sediment swept in from Tijuana. Sediment raises the level of the ground, stopping the twice-daily tidal flushing that keeps the wetlands wet.

Army Corps of Engineers contractors completed the fence separating San Diego and Tijuana in July. They filled in the notorious cross-border canyon known as Smuggler's Gulch, added a second layer of steel fencing and built a road for Border Patrol vehicles running parallel to the fence. The gulch, once a deep canyon, is now filled with an earthen berm more than 100 feet tall.

Though native plant seeds were sprayed across the berm and other newly created hillsides in Border Field State Park, Phillips said the federal government never irrigated them. Only a handful of plants grew. Other hills have none.

"They sprayed it (with seed) and hoped for the best," Phillips said. "It was a waste. A token gesture."

A U.S. Customs and Border Protection spokeswoman, Jenny Burke, said the project was built to Caltrans' erosion standards. The agency will "monitor the situation and is considering other actions as required."

John Robertus, executive officer of the San Diego Regional Water Quality Control Board, the local water pollution police, said the project doesn't have all the safeguards his agency would've required. He said if the board had jurisdiction, it would've required temporary irrigation to ensure plants grew. Robertus said he, too, is concerned about the project's potential impacts on the estuary.

Fence construction has left a mark on other areas in San Diego County greater than what would've been allowed without the waiver. Further east in the federally protected Otay Mountain Wilderness, a road built along a new four-mile section of fence also left barren hills, said Joyce Schlachter, a wildlife biologist with the federal Bureau of Land Management, which oversees the area.

"When we get any rain, it's going to be an erosion nightmare," Schlachter said. Seeds have been sprayed there, too, but not watered, she said. No plants have grown.

The impacts on Otay Mountain stretch beyond possible erosion. Phalanxes of dump trucks going to work on the fence have rumbled up and down a dirt road, spreading clouds of dust as far as 30 feet away, blanketing Tecate cypress, a rare tree found only on three peaks in San Diego County. (Its range extends into Mexico.) The tree, a bushy evergreen, provides food for the Thorne's hairstreak butterfly, a rare thumbnail-sized insect that feeds only on the cypress and that has been suffering from too-frequent fires on the mountain.

Construction crews cut down more than 100 cypress that survived a massive 2003 wildfire to widen an existing road for construction vehicles, Schlachter said.

If laws hadn't been waived, the Bureau would have required construction crews to minimize their impact on the trees, she said. Homeland Security officials consulted with the Bureau, Schlachter said, then didn't follow all of its advice.

"When it came right down to it, they did what they wanted to do," Schlachter said. "And they knew they couldn't be stopped. We did not have control over it."

Williams has reared a small number of Thorne's caterpillars on both dusty and clean leaves in her laboratory. Results from the on-going experiment so far indicate that more caterpillars survived on clean leaves, she said.

Before construction began last year, Williams said the roadside habitat looked much healthier. She saw more butterflies last year than she did this year, though she noted that population sizes vary annually.

"Now it's obviously degraded habitat," she said, noting that rainfall may help clean the leaves. "The appearance of the quality of the site is strikingly different."

Burke, the Customs and Border Protection spokeswoman, said the agency consulted with U.S. Fish and Wildlife officials about the Otay project and routinely wets the road to keep dust down. She said Customs and Border Protection will monitor the dust and maintain the roads "to their construction standard," and could periodically apply "dust-control agents," which include sap.

Those efforts haven't always worked well. Sap was sprayed on trees beyond the road's edge, Schlachter said. Dust stuck on top of the sap, she said, making the trees' survival questionable. "They're creating more risk to the plants," she said. "That's an issue."

On at least one occasion, crews didn't water the road -- even though they had the necessary equipment on hand. One morning in June, a water truck escorted dump trucks to the work site but didn't spray any water. As the trucks wound through the wilderness past Tecate cypress, choking clouds of dust followed.

"Many people, including myself, expressed strong concerns about the border fence and the implications of exempting the construction of the fence from environmental laws," Davis said. "Unfortunately, those concerns are becoming a reality. I hope the Department of Homeland Security will continue to work with Congress and local officials in finding an immediate solution and work toward a permanent one."

A representative of an environmental group that opposed the fence because of concerns about erosion said its construction reinforced the reasons for his opposition. Jim Peugh, conservation chairman of the San Diego Audubon Society, said he hopes the fence serves as an example of why environmental laws should never be waived.

"The idea of building something without seeing how you're going to maintain it -- it's just going to fail," Peugh said. "That's an insane thing to do. And this project proves that beyond a doubt."