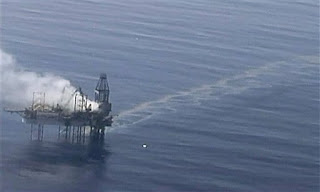 As you may be aware, a new offshore oil and natural gas well off the coast of Australia blew out last Friday and may continue spewing petroleum products into the ocean for up to two months. This very unfortunate incident illustrates two important points:
1. Spills are nearly always larger than first reports indicate. In this case, the initial newspaper accounts estimated that about 40 barrels of oil were discharged. Two days later, the size of the plume was said to be over 15 kilometers long, ships were advised to stay more than 20 nautical miles away from the rig, and it was estimated that the well is likely to pour oil into the Timor Sea for nearly two months before it can be stopped.
2. Offshore oil drilling is NOT SAFE! The oil industry and the "drill baby drill" crowd continually tell us about all the technological advancements that have occurred since the disastrous 1969 Santa Barbara oil spill. They tell us that can't happen again and that we don't need to worry about oil on our beaches. Well, we just had another oil rig blow out. I wonder if the folks in Florida and the politicians that are supporting new drilling off Florida's coast are having second thoughts?