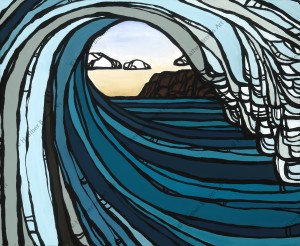 We are so stoked to have Heather Brown from Hawaii back this year with an awesome new piece entitled, 'Barrel View'...

Heather has certainly made a name for herself not just in Hawaii but all around the world and been coined the 'Godmother of Modern Surf Art' by the Los Angeles Times !

Throughout her career she has been named “Best Up and Coming Artist in Hawai‘i,” “Best Artist in Hawai‘i,” and Rip Curl’s “Artist of the Search,” garnering herself a clothing line, “Heather Brown for Rip Curl.” In 2009, she opened The Heather Brown Gallery in Tokyo, Japan, and in 2013, opened a second gallery in Osaka, Japan. She has produced art for The Vans Triple Crown of Surfing, Jack Johnson’s Kōkua Festival, The Surfrider Foundation, and numerous non-profits around the world, knowing deep in her heart that giving back is one of the most important things in life.