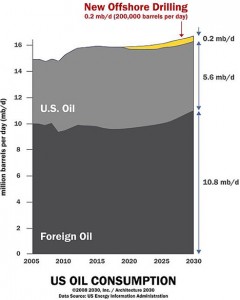 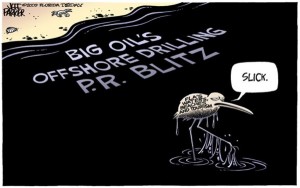 Right now, big oil and their allies are making a huge push to expand offshore drilling operations in the Southeast. They are working tirelessly to deceive the public about the risks and so-called “benefits” of rigging the coastlines. Elected officials, particularly those in the Florida state legislature, are hearing more from (and listening to) oil lobbyists than they are from concerned coastal constituents on this issue. Talk of drilling in the Southeast is even rearing its ugly head in federal climate and energy policy discussions, a place where polluting fossil fuels certainly do not belong.
Expanding drilling in the U.S. can never make us sinificantly less dependent on foreign oil. The United States contains only 2.5% of the world’s oil resources yet we consume 24% of them. Based on current consumption rates (20 million barrels of oil per day), even if we were to recover all of the “ technically recoverable” oil in the Eastern Gulf of Mexico and along the Atlantic shoreline, it would only last the US 13 months. We could drill every national park, wildlife refuge, and coastline, and still need to import over 60% of what we would need. U.S. oil is only a drop in the bucket. The only ways we will ever reduce our dependency are to reduce our consumption and develop new clean energy sources.
More