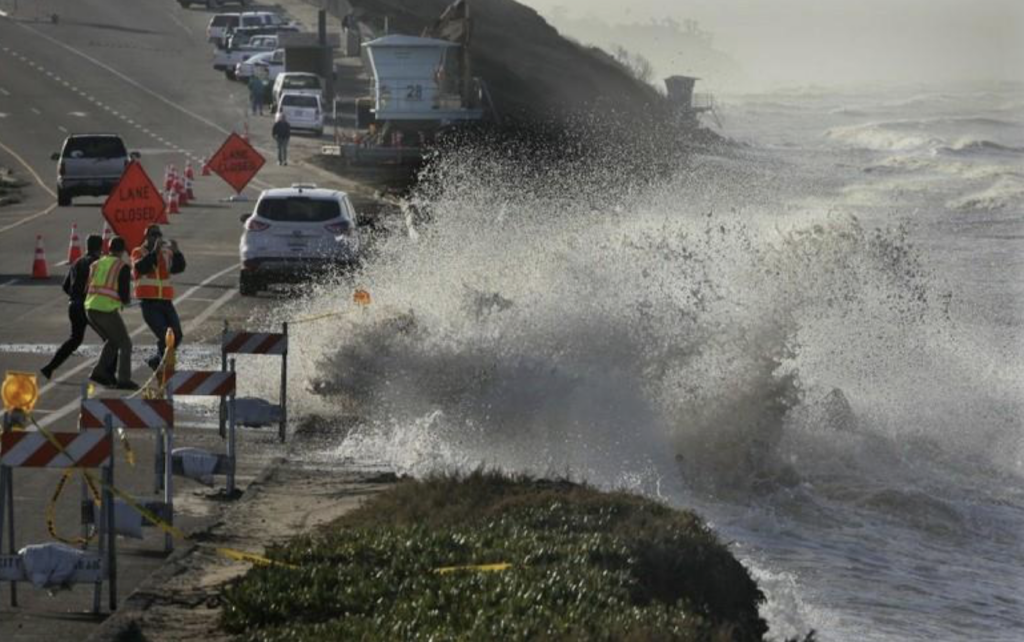 When it comes to saving the beaches we love, rising seas are the biggest threat. The U.S. National Oceanic and Atmospheric Administration (NOAA) predicts that sea levels will rise one foot in the next 30 years, as much as they did in the last century. Just one foot of sea level rise (SLR) can shrink a beach by 100 feet, which is alarming news for many of San Diego’s narrower beaches.

SLR threatens not only our beaches, but our public and private coastal infrastructure as well. Thankfully, some of our coastal cities take the threat seriously. The City of Carlsbad, for example, recently began drawing plans to move southbound Carlsbad Blvd. inland along a one-mile stretch that is already prone to flooding during seasonal high tides.

Carlsbad’s 2017 SLR Vulnerability Assessment categorized southbound Carlsbad Blvd as a high risk exposure area. In May 2020, the California Coastal Conservancy awarded the city a $500,000 Climate Ready Grant to study coastal erosion along an approximately 3-mile stretch from Terramar to Batiquitos Lagoon, and to plan south Carlsbad Blvd’s eventual relocation away from the coast. The realignment area runs from Manzano Dr. to Island Way, a one-mile stretch in the project zone often referred to as "the dip" since the road descends to sea level on either side of coastal bluffs.

Moving southbound Carlsbad Blvd is crucial from a coastal preservation perspective, as it provides a buffer zone for the beach to migrate landward as sea levels rise. Surfrider has advocated for managed retreat projects like this one for decades. In the long term, the only way to save our beaches from drowning under a rising sea is to give them space.

City staff provided several chances for the community to chime in on the south Carlsbad Blvd. Coastline Project. In February 2022, they promoted an online public survey and held a virtual meeting to collect community input. We applaud the City for their public outreach. However, their communications deemphasized the fact that SLR was the impetus behind the project plan (not to mention the grant paying for it). Question 3 of the survey, for example: 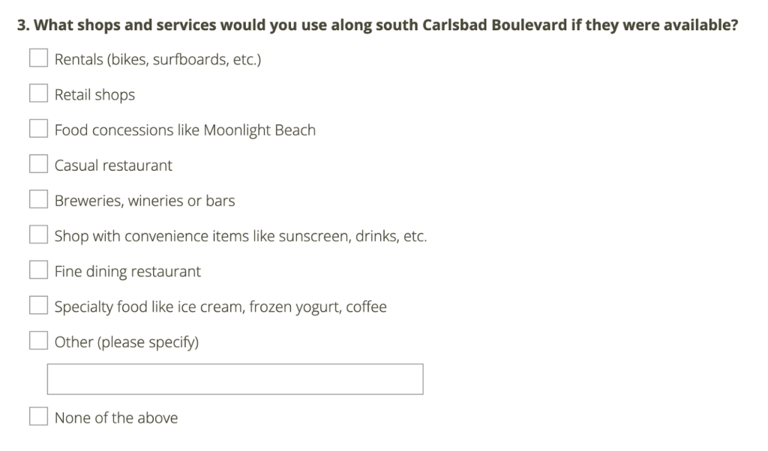 Why move a road out of harm’s way, just to replace it with other forms of infrastructure - like restaurants and retail shops - that are equally susceptible to SLR?  Fortunately, the majority of survey respondents felt the same. We requested the survey results via a public records request and analyzed them. In response to Question #3 above, 41% of respondents selected the "None of the above" option. Many also added heartfelt comments asking City staff to prioritize open space, beach access, and preserve the coastline for generations to come.

With the survey results, we also created the word clouds below. They illustrate that survey respondents value increased access to the coast over the potential for additional shops and amenites. 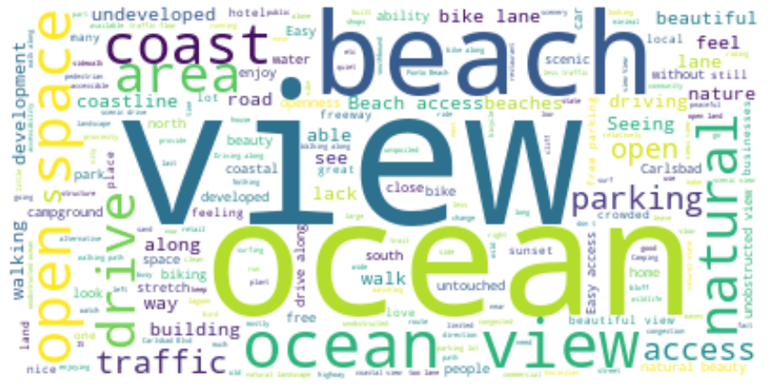 What do you like most about south Carlsbad Blvd. today? 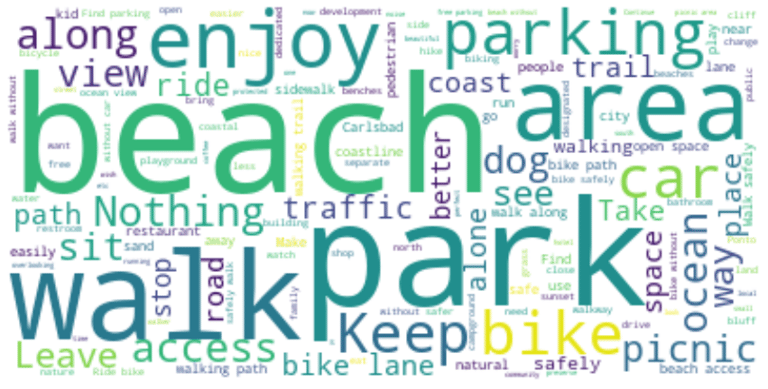 What would you like to do along south Carlsbad’s coast that you can’t do today? 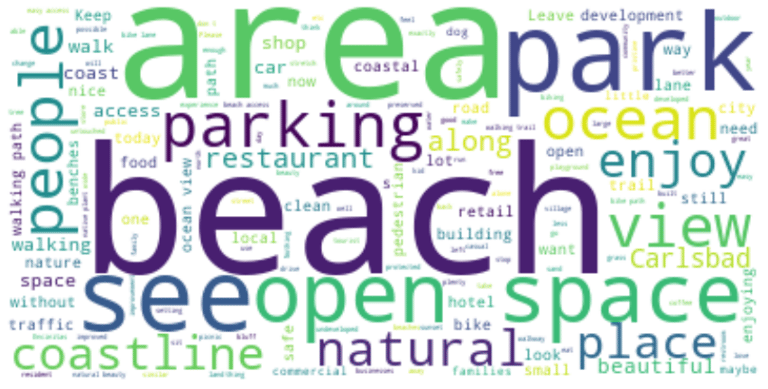 Let’s say you were visiting south Carlsbad’s coast 20 years from now, and it’s been improved just how you like it. Describe what you see and experience?

Surfrider would love to see the City refocus the plan back to its original goal -- namely, to address the accelerated SLR projections that are the primary reason to move Carlsbad Blvd. Instead, it appears they’re using the SLR study as a chance to weigh different land use options. As the planning process continues, Surfrider will advocate for the additional space to be dedicated towards expansion and preservation of existing public uses. These include beach recreation, pedestrian and bike trails, additional parking, and perhaps eventual relocation of South Carlsbad State Beach's campground, which is equally threatened by SLR.

Carlsbad has already implemented short-term bandaid fixes to try and delay the effects of sea level rise. Rip rap boulders have been placed along south Carlsbad Blvd to prevent additional damage from storm surge and erosion. However, rip rap and other types of hard armoring steal valuable beach space from the public, and armoring only hastens future erosion (see our true cost of armoring the coast blog). If the road remains unchanged, higher tides and more frequent storms will eventually cause even more damage, forcing emergency repairs and taking what remains of the beach along with it.

The question of whether to move this stretch of Carlsbad Blvd is not if, but when. All evidence suggests that completing the project sooner than later will result in the best deal for everyone.

*Correction May 4, 2022 - we originally insinuated that the City's survey was focused on the one-mile relocation area. City staff clarified to us that the survey's focus was on the entire 3-mile coastal erosion study area. This has been corrected. However, we maintain that any permanent private/ commercial development in the coastal erosion study area would likely be a precarious decision and ultimately lead to beach loss and reduced beach access.