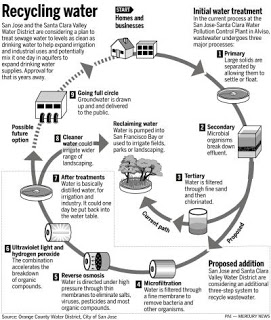 The Santa Clara Valley Water District will vote on a plan today to build a new $52 million recycled water facility at the San Jose-Santa Clara Water Pollution Control Plant in Alviso that will convert sewage water to high-quality water, producing up to 8 million gallons a day.
"This will help us meet future water demand," said Keith Whitman, water supply manager for the Santa Clara Valley Water District. "Recycled water is local, it is nearly independent of climate change and drought, and it doesn't have some of the uncertainties of taking water from the delta."
Currently, sewage water at the San Jose plant is treated to the highest levels in the U.S. — tertiary treatment — in which sewage is settled, broken down with bacteria, then filtered and disinfected with chlorine. Most of the water then is released into San Francisco Bay. The new plant would go further, taking the treated effluent and cleaning it with ultraviolet light, microfiltration and reverse osmosis, to kill any bacteria and remove microscopic contaminants. At that point, it is essentially cleaner than most drinking water in taps or bottles.
More