Coming Soon to a Beach Near You! Why Desalination is BAD. 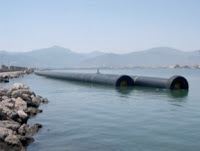 While these images are not from Tampa Bay, they are engineering photos used to demonstrate what open ocean intake really looks like.

The following text was added to Wikipedia's Desalination page to lend some balance to the discussion. It is a summary of the Tampa Bay Desal project as adapted from the Tampa Bay Water website.