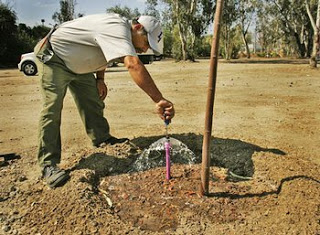 Felipe Guerrero adjusted a sprinkler at Morelos Park in Tijuana.
The park uses treated wastewater from the new Arturo Herrera Plant
for its irrigation needs.

TIJUANA — Amid birthday picnics, brisk morning strolls and visits to the botanical garden, visitors to Tijuana's largest public park might not notice the radical change that has taken place: The trees, plants and grass are being irrigated with treated wastewater.

After years of planning, Tijuana's water-reuse program was launched last month in the city's fast-growing eastern end. Every day, 470,000 gallons are piped to the sprawling Morelos Park, a green oasis surrounded by parched hillsides packed with small houses.

“For every drop of that recycled water that we use, that's one less drop that we have that we have to carry from the Colorado River,” said Hernando Durán, head of the Baja California Public Service Commission in Tijuana.

Although it will take years to develop, the program marks the start of what authorities say is an important effort to use treated wastewater in the city, reducing the city's dependence on the Colorado River, which is the source for 90 percent of the region's drinking water.

The project is the result of an effort by the state to expand sewage treatment in Tijuana. The aim is to clean up discharges into the ocean and eliminate the cross-border contamination that plagues San Diego beaches when it rains.

Named for the purple pipes that carry reclaimed water, the project is known as Proyecto Morado, or Purple Project. For now, it involves only a small portion of Tijuana's flow of treated wastewater, most of which is discharged into the Pacific Ocean. But by 2013, the state hopes to find ways to reuse as much as 20 percent of the treated effluent.

The construction of two new treatment plants in eastern Tijuana, one of which began operating in March, is central to the plan. Their operation not only launches the water-reuse project, but will serve to decrease the pressure on Tijuana's overburdened main sewage treatment plant at Punta Bandera. With the new plants' operation, the discharge that flows down the Tijuana River channel toward San Diego will also become cleaner.

While off to a modest start, Tijuana is one of few cities in Mexico exploring water reuse, said Jose Luis Castro, a Monterrey-based researcher at the Colegio de La Frontera Norte.

Other Mexican cities with water-reuse programs include Monterrey, Chihuahua and the Baja California capital of Mexicali, where the state utility sells untreated wastewater from its Zaragoza Treatment Plant to a thermoelectric plant, which treats the water and uses it in cooling towers.

Baja California's work on water-reclamation projects reflects the interest and hurdles faced by U.S. states and cities that also draw drinking water from the Colorado River. The city of San Diego has two reclamation plants and 80 miles of purple pipe, but it does not have enough irrigation customers to buy all the water that it can treat.

Until now, Tijuana has had several small water-reuse projects – the Real del Mar Development near Punta Bandera uses treated water in its landscaping, as does the Campestre Country Club. But opening the three-mile purple pipeline connecting Morelos Park to the new Arturo Herrera Plant is seen as the first step in a broader effort to find uses for treated water.

At full capacity, the Arturo Herrera Plant will treat the sewage of about 265,000 people to advanced secondary level, clean enough for irrigation. The state is building a similar but smaller plant, La Morita, near Tecate. It should be completed by the end of the year.

Until last month, Morelos Park relied on well water for its landscaping. Park officials say they have adapted easily to the change, and staff members say they hope to draw more water to expand the landscaped area.

“For our green areas, this is a magnificent thing,” said Alberto Palacio Bórquez, director of the park's nursery and landscaping, who toured the treatment plant with fellow employees.

Next year, the state expects to extend piping down the Tijuana River channel – where gravity carries it toward the city's Rio Zone and the international border – first for irrigation of public spaces, but potentially to sell to businesses.

In 2011, the public service commission plans to begin pumping a portion of the treated water to the Mesa de Otay district for use in school campuses, parks, traffic circles, sports facilities and industry.

But while applauding the efforts, some say not enough work has been done in securing uses for the water, and ways to deliver it.

“Who's going to pipe that water from where it is to the industrial parks? That's very costly,” said Oscar Romo, coastal training director at the Tijuana River National Estuarine Research Reserve in Imperial Beach and a longtime activist in Tijuana sewage issues. In addition, he said, “You need to create a market, and the creation of that market is perhaps the biggest challenge.”

No matter what the reuse market, opening the plants spells important improvements for the coastlines of San Diego and Tijuana.

Baja California has also taken steps to make sure large discharges of treated water from the plants down the Tijuana River don't spill into the United States and harm the federally protected saltwater estuary in Imperial Beach. Mexico has spent $6 million to ensure that does not happen, said Doug Liden, an environmental engineer with the U.S. Environmental Protection Agency in San Diego.

The state has built a system to capture the treated water before it can cross into the United States and pipe it for discharge into the ocean several miles south of the border.

Although cross-border flows have virtually stopped during dry weather, sewage-contaminated water from Tijuana has continued to hit the Tijuana estuary and San Diego beaches during and after heavy rainfall. But with the new plants, “even during storm events, you're going to have better-quality water, when it does cross the border,” Liden said.