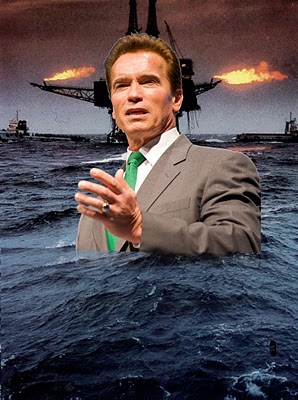 The first "flaming oil rig" award of 2010 goes to California Governor Arnold Schwarzenegger for his oil-for-parks budget scheme that proposes to fund California State Parks via a new lease for offshore drilling in Santa Barbara.

What makes this proposal so offensive is that it holds our state parks for ransom (more on that here), the presumption of approval at the State Lands Commission (despite being denied last year) and willingness to end run the State Land Commission in the event it gets denied there (the first two attempts failed).

Read the strong reaction from others in the media here.

Here's a rundown of the previous attempts to ram this proposal through:

Subverting State Lands Commission is Not The Answer