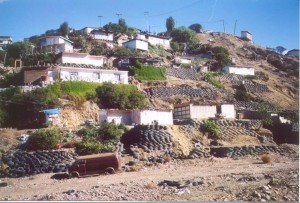 “It’s a secondhand town. Everything has been used by somebody else before,” says Oscar Romo, a UC San Diego lecturer on urban studies and planning and the Coastal Training Program coordinator at the 2500-acre Tijuana River National Estuarine Research Reserve (TRNERR) in Imperial Beach. The National Oceanic and Atmospheric Administration administers the Coastal Training Program.”

“When torrential rains come—as they did in the winter of 2004-2005—mattresses, tires and other secondhand debris hurtle down the canyon’s eroded hillsides, and end up north of the border in the Tijuana River estuary. South of the border, the storms bring death and destruction to impoverished canyon residents—as improvised shacks built from tires, garage doors and other scrap materials tumble down the slopes.”

There are people who need help in our own back yard (we’re from San Diego). Most of the tires we are building our first home with were pulled from the Tijuana River Estuary, after they had washed down from Los Laureles Canyon. Are you thinking what I’m thinking?

- Poverty. Migrant workers build their homes cash-out-of-pocket. Many of them work in Maquiladores making $2-3 per hour, and being exposed to harsh chemicals. I can’t say for certain, but I’m willing to bet a large portion of their wages goes towards food and clean water.

-Sanitation. None whatsoever. This is why one of the best beaches in San Diego, Imperial Beach, is shut down 180 days out of the year. When it rains in Tijuana, all of that raw sewage is swept into the canyons and then to the estuary across the border, finally leading to the ocean.

-Clean Water. There is no running water here. These homes are built by squatters out of any materials they can get their hands on (sound familiar?). Wages earned from terrible Maquiladores jobs have to pay for a natural human right.

-Food. This, along with water, goes back to poverty. I don’t know figures for this particular area, but we all know there are plenty of places around the world where people work terrible jobs for meager wages, just to feed themselves and stay hydrated. There are definitely people in need here.

-Erosion. Intense rains in the winter wash all sorts of debris down the canyon, and put people’s lives in danger. The canyon gets eaten away, taking the homes people have pieced together on top of it.

First things first, we have to find our community. We have to find a group of people within this canyon that are willing to work (most work at factories so we will have to figure that out, perhaps hire labor) and open to the idea of a home that takes care of those within it. We get them to organize, create a board, and hold each other accountable.

The tires are already there! As it stands now, the people are trying to hold up the hillside and build homes on top of it. We could literally bulldoze it all down, saving tires and any other reusable materials, and cut into the hill. As for the rains, community planning will involve channeling all that rain water around the homes, preventing erosion. The rainwater would be collected in massive cisterns that can be used efficiently for the people’s needs. We can build individual homes, or long apartment style complexes. The homes we build will be thermoregulating themselves, and producing food as well.

We plan to address sanitation with a community style restroom. Right now we are exploring the uses of solar toilets along with humanure composting. This is one of the most important issues, and possibly, a culturally sensitive one. The people will have to decide what kind of sanitation system they would like.

Most important is our final goal of DETACHMENT. While building homes, we will be educating and training our replacements. It does not require a tremendous amount of skill to build these homes, just lots of work. We will train people how to build these homes so that when we eventually leave, the idea will continue to spread. People can take their housing, and their future into their own hands. We won’t be needed anymore.

These are REAL SOLUTIONS. We all know there are environmental and social issues joined at the hip that need to be addressed. I don’t know about you, but the majority of what I hear are complaints, and I’m over it. It’s time to take action, it’s time to solve problems.