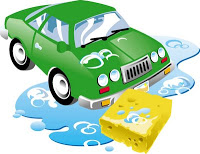 I got a free car wash last week. No, not with a coupon from the local wash-n-dry but, a gift from mother nature in the form of rain. I used to avoid washing my truck because I was lazy. Now I can mask that laziness and say that I am being a good environmentalist by conserving water.

Right now Southern California is facing a critical point in dealing with our freshwater supply as drought conditions continue in spite of the recent rains. Where does our water come from, how will we use it and what will we do with it after? These issues have direct impacts on the ocean as the ill-planned desalination plant in Carlsbad moves forward and municipalities continue to dump treated wastewater in the ocean. According to the City of San Diego:

“During a normal year about 10-20 percent of the City's water supply is made up of local rainfall and is captured in one of our reservoirs. The remaining 80-90 percent is imported … from two separate sources. A 242 mile-long aqueduct brings Colorado River water from Lake Havasu to the southland. This water may have originated as snow melt on the mountain slopes of Utah, Wyoming, or Colorado and traveled more than 1,000 miles before being diverted to Southern California.

San Diego also receives water which originates in Northern California from the State Water Project. This water is captured in reservoirs north of Sacramento and released through natural rivers and streams into the Sacramento-San Joaquin Delta. The 444 mile-long California Aqueduct then carries the water from south of the Delta to (Southern California).”

Wrap your head around that for a moment. Most of the water in San Diego comes from hundreds of miles away and some of it can travel over 1000 miles from the source before it reaches our taps. That alone should speak volumes on how precious our freshwater really is. Unfortunately, developers and planners have not historically treated water as a limited renewable resource in our semi-arid climate. Excessive sprawl and water intensive non-native landscaping have over-burdened the water supply.

The Surfrider Foundation has worked with policy makers to mandate low-impact development and strengthen over-watering ordinances but the solution goes much further than that. The Surfrider Foundation San Diego Chapter has launched a campaign titled Know Your H2O to educate the public about the three most common options proposed to increase our water supply: conservation, Indirect Potable Reuse (IPR), and ocean desalination.

Water conservation takes many forms; from turning off the faucet while you brush your teeth to the local mobile home park that reduced their water usage by one million gallons last year through a community effort. Most people have done a good job conserving water indoors with low-flow showerheads, more efficient toilets, etc. but lots of work still needs to be done conserving outdoors.

Ocean Friendly Gardens (OFG) is an ongoing campaign that covers the outdoor water conservation aspect. OFG is all about CPR, which stands for Conservation, Permeability, and Retention. Whenever water leaves a property it has the ability to take pollutants with it. Fertilizers, pesticides, and oil are easily picked up by the power of water and transferred directly to our storm drains and into our rivers and oceans. While this runoff is greatest during rainstorms, urban runoff occurs all year round as a result of improper irrigation, washing cars on pavement, and hosing down driveways. In addition to conserving water by using native plants, requiring little to no fertilizers, and reducing or eliminating pesticide use, Ocean Friendly Garden’s have the added benefit or reducing urban runoff.

Imagine if we could stop sending treated wastewater out to the ocean and reuse this water to increase our local water supply. Indirect Potable Reuse (IPR), which is a funky name for water recycling, would help achieve that goal. Instead of spending time, built-in energy and money to send secondary or tertiary treated water to the ocean, we could take a couple of extra steps to treat the water further than health standards and mix it back in with our water supply. Sounds far-fetched to some, but the reverse osmosis and UV light treatments remove all bacteria and endocrine disruptors from pharmaceuticals and the resulting water is much purer than what is currently being delivered to Southern California. Reclamation for potable uses is the future; it has lower costs and is less energy intensive compared to desalination. Reclamation should be considered as the first choice in Southern California’s sustainable fresh water plan. Our current paradigm for reclaimed water – using it for irrigation – does nothing to promote conservation or the use of drought tolerant plants. Instead, it subsidizes golf courses and inappropriately planted public spaces such as highway medians.

Ocean desalination has received the most press and publicity lately as the largest ocean desal plant in the western hemisphere is planned for Carlsbad. Surfrider does not oppose desalination. We oppose desalination done poorly, and when it is prioritized over reclamation and conservation. Responsible desalination requires alternative intakes, unlike what is being proposed in Carlsbad. The Carlsbad proposal uses antiquated once-through-cooling infrastructure as the primary intake source for ocean water. This 30+ year-old dinosaur technology that has direct and unmitigatable impacts on marine life has been found to be illegal by federal courts. Mitigation of marine life impacts from impingement and entrainment through the use of the intake system by offering offsite wetland restoration misses the point – the law requires the use of new technologies to avoid the impacts in the first place. To continue to threaten marine life continually and indefinitely is short-sited and inexcusable while better technologies are available. Finally, the Carlsbad desalination plant sets a bad example for the issue statewide. The fact that we are in a drought condition does not justify ignoring our environmental laws.

We spend so much energy and effort to get water here that we must use it wisely. Visit www.surfriderSD.org to check out some great Know Your H2O videos, find more info on the issues along with links to great blogs and various ways to get involved. Share the videos with your friends and stay tuned for our action alert to let the decision makers know that you demand responsible ocean desalination.