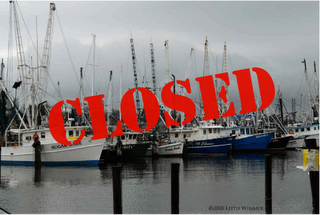 On Sunday, federal authorities closed all recreational and commercial fishing over a large portion of the Gulf - from Louisiana to the Florida panhandle. The ban will remain in affect for at least the next ten days.

The closure affects what is one of the nation's richest fishing grounds - supplying 44% of all shrimp and 36% of all oysters caught in America. With the spill continuing to flow at upwards of 210,000 gallons a day, authorities have not been able to predict how long the ban may continue. Fishermen worry that any disruption will open the door for foreign competition, which already accounts for over 80% of total consumption in the United States.

Recreational fishing will likely be hit just as hard. According to the American Sports Fishing Association, saltwater angling supports more than 300,000 jobs and contributes $41 billion dollars annually throughout the Gulf Coast.

As has been mentioned numerous times on this blog and elsewhere, this is just a taste of the economic impacts associated with offshore spills. Rest assured, it will only get worse from here.