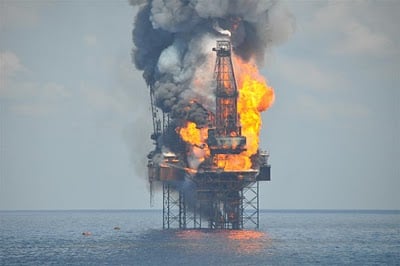 Reports are coming in this morning of an explosion and fire on the Transocean rig, Deepwater Horizon, in the Gulf of Mexico. According to initial news reports, between 11 and 15 of the 126 crew members are missing following the explosion, which occurred late Tuesday night.

The explosion comes on the heels of an explosion and fire on board the West Atlas rig in Australia last November. In that incident, the rig leaked oil into the environmentally sensitive Timor Sea for nearly 70 days before it caught fire.

No word yet as to if the Transocean rig is leaking oil. The Coast Guard has sent four helicopters, four boats and a plane to assist in the evacuation of the remaining crew and to assess the situation.

The Guardian reports that the rig remains ablaze and is now listing to one side.

The New York Times is now reporting Coast Guard officials now believe that the rig "may go over sometime today."

WKRG TV is reporting that the rig was drilling but not in production.

Forbes analyst believes the accident may have been the result of a "blowout" whereby the rig loses the ability to regulate pressure on the drill as it churns through the rock and sediment beneath the ocean floor. Oil or gas then flows back up the wellbore, where it likely ignited, causing the explosion.

The Wall Street Journal is reporting that BP, who were contracting the rig from Transocean, had filed a permit with the Minerals Management Service on April 16th to temporarily abandon the rig.

Some good news - according to Rueters News Service, the 11 missing workers have just been found alive and safe!

The Coast Guard and the Minerals Management Service have scheduled a news conference for 3 p.m. CST.

MSNBC is now reporting that the missing crew members have in fact not been found.

The Coastguard has announced that is has suspended its aerial search for the missing crew members for the night.

The Coastguard resumed its aerial search for the missing crew members this morning. The rig is still burning. ABC News is reporting that Coastguard officials are working with BP to determine how best to shut of the fire's fuel source, which may in fact be oil. Video of the burning rig can be found here.

** NOTE - this is the last update on this posting. Please see new posts above. **