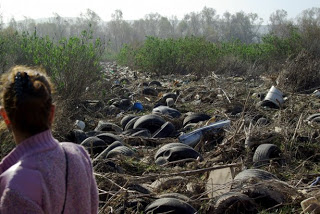 Sen. Denise Ducheny, D-San Diego, sponsored Senate Bill 167 to address the environmental hazards created by thousands of used tires that wash into San Diego County during storms. The legislation frees up fees collected for tire recycling so they can fund programs designed to keep tires in Mexico from entering California's waste stream.

“(It) will allow California to work upstream in Tijuana, at the root of the problem, to stop the flow of used tires,” said Ben McCue of the conservation group WiLDCOAST in Imperial Beach. “This is a victory for the environment and a great deal for California taxpayers.”

McCue helped write the bill as part of a graduate school program at the University of San Diego. He and his classmates lobbied for its passage in Sacramento.