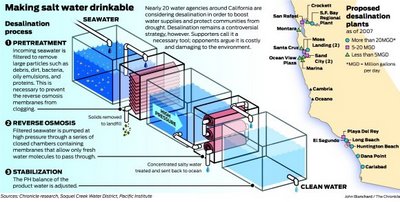 Is it time to stick a straw into the Pacific Ocean?

About 20 water agencies up and down the California coast seem to think so.

"People are worried about water supply," said Michael Carlin, assistant general manager of water at the San Francisco Public Utilities Commission. "Desalination is for drought supply, for an emergency, and it augments existing supply - it's another tool in our toolbox."

But critics argue that desalination is an expensive, environmentally questionable last resort in a sprawling state that misuses one of its greatest assets.

"People are looking for an easy solution, and they look to the ocean," said Linda Sheehan, executive director of the California Coastkeeper Alliance, a watchdog group. "They're ignoring the opportunities we have for conservation, storm water reuse and water recycling."

This is not the first time the desalination debate has surfaced in California. Dry spells and government funds for infrastructure often prompt new studies and investment in the process, which strips salt, debris, bacteria and other substances from saltwater and funnels it to local taps.

But climate change, rising water costs and threats to wildlife have increased the stakes.

CLICK HERE for the full story from the San Fran Chronicle/www.SFgate.com