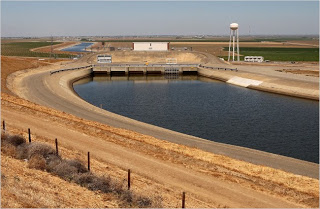 It's Fish vs. Lawns, not North vs. South

By DANIEL WEINTRAUB
NY Times
Published: October 17, 2009
Anyone who has flown in an airplane above California’s vast Central Valley has seen them: two canals snaking north to south, carrying Sierra Nevada snowmelt to thirsty farms and cities via the sprawling Sacramento-San Joaquin Delta. Northern California natives are raised to scowl at these channels and the supposedly rapacious, wasteful, environmentally insensitive Southern Californians they supply.
But the federal government’s Central Valley Project and the California Aqueduct are not the only straws sucking water from the Delta or diverting the Sierra’s liquid bounty from its natural path to the sea.
Residents of seven of the nine Bay Area counties — all but Sonoma and Marin — draw much of their water from the same source. On their behalf, rivers have been dammed and majestic gorges inundated. To keep them in showers and sprinklers, hundreds of miles of pipeline has been built to move water around or from the Delta, which scientists say has been pushed to the brink of ecological collapse.
Gov. Arnold Schwarzenegger and legislative leaders have been haggling behind closed doors for months seeking a historic agreement to make California’s water supply more reliable while restoring and preserving the Delta and its wildlife habitat. Some in the Bay Area fear that the true aim of these talks is to allow construction of a new canal to send still more water south for farmers to grow crops in the desert and Angelenos to fill their pools and wash their BMWs.
But Bay Area interests have been fighting as hard as anyone to protect their right to pull water from the Delta and the rivers that feed it.
It is no accident that a key player in the water talks is State Senator Joe Simitian,. a Democrat from Palo Alto. He represents the Silicon Valley, where the pharmaceutical and computer chip industries depend on a reliable supply of clean water for their research, development and manufacturing. They are working feverishly to guard the valley’s supply.
“Historically, people have characterized this as a north-south issue,” Mr. Simitian said last week in an interview. “But the fact of the matter is a significant portion of the water for the district I represent comes right out of the Delta.”
Or, as the Senate leader, Darrell Steinberg, put it: “The whole Northern California versus Southern California frame is so 1980s. It’s different now.”
Indeed, Mr. Steinberg laments he has spent too much time lately fending off attacks from the East Bay Municipal Utility District.
Unless you pay your monthly water bill to this agency known as East Bay MUD, you have probably never heard of it. It serves 1.3 million thirsty customers. Eighty years ago, the district built a dam on the Mokelumne River in the Sierra foothills, creating Pardee Reservoir, then built the 90-mile Mokelumne Aqueduct to carry its captured Sierra runoff. Now the district is contemplating a big expansion that would inundate a scenic section of the river to serve future growth.
Just like the water that goes south to Los Angeles, the water that residents drink in Oakland, Berkeley and Walnut Creek would flow into the Delta and help to keep fish alive had it not been diverted. The same is true of San Francisco, which blocked the Tuolumne River nearly 100 years ago, filled Hetch Hetchy Valley and uses the water for itself and cities on the Peninsula.
A key issue in this fight is whether Bay Area residents from San Francisco to Fremont should give up some water to preserve the Delta’s ecosystem. Randy Kanouse, a Sacramento lobbyist who represents East Bay MUD, says that if that happens, more water rationing will surely follow.
“When you make conservation a permanent way of life and all of your customers take the waste out of their household and business use,” Mr. Kanouse said, “there’s no more excess water they can give up. Consumers will have to let their lawns die, their landscapes die, and business customers will have to cut production. If the Mokelumne River has to have more water kept in the river to flow into the Delta, it’s a virtual certainty that rationing will be more frequent and deeper than it is today.”
Forgive Mr. Kanouse if he sounds like a thirsty Southern Californian. He, too, has water interests to protect. Yes, this fight might be part north versus south. But there is a western front that extends all the way to the Golden Gate.
Daniel Weintraub has reported on California politics and policy for more than 20 years.