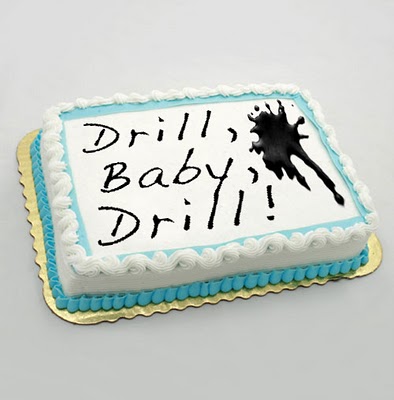 Just in case you didn't feel that MMS was too cozy with the oil drilling industry, their Alaska office removed all doubt. See apology below after NY Times reported on MMS office celebrating the recent finds about their office lacking appropriate environmental standards in review proposed oil drilling efforts in the Arctic with a cake decorated with "Drill, Baby, Drill" on it.

As the manager in charge of the Alaska Region, I apologize to
everyone in the Minerals Management Service with regard to the cake
at a recent Alaska Region All Hands meeting, as reported in a New
York Times article today. The cake had the words "Drill, Baby,
Drill', plus other words which were meant to take light of the words.
This was simply wrong to have. I failed in preventing this from
happening in my office.

This week Interior Secretary Ken Salazar unveiled a plan to separate MMS into three agencies because the energy development, enforcement and revenue collecting functions have conflicting missions and must be separated. Lack of oversight on safety devices and procedures are partly to blame for the BP blow out.