The environmental issues in the Tijuana River Valley that impact the San Diego/Tijuana border region, at times, seem to be insurmountable. The issues are complex and they don't just impact our ocean, waves and beaches. There are significant economic and human health factors at stake, all intertwined to create the need for an all hands on deck mentality to address them. 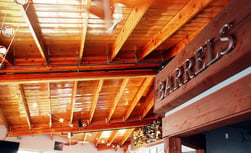 day, May 13th, the Surfrider Foundation San Diego County Chapter's No Border Sewage (No BS) Committee hosted a "Relaunch Party" at Barrels Restaurant & Lounge in Imperial Beach. About 50 attendees came together for an evening of food, drinks, raffle prizes and conversation about the problems that plague the Imperial Beach community and beyond. And while the issues that impact this region on both sides of the border may seem overwhelming at times, we were reminded that together we can make a difference.

The No Border Sewage Committee's mission is to address and eliminate the sewage, trash, sediment and chemical waste that plague our ocean, waves and beaches in the border region. We do this by raising awareness through outreach and education, while impacting policy through our advocacy work. In 2008, we helped form a network of grassroots community groups and non-profits from the U.S. and Mexico called the Tijuana River Action Network (TRAN). In this network we build consensus and work in collaboration to address the conservation and restoration of the Tijuana River Watershed. 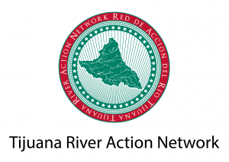 The Relaunch Party in Imperial Beach was No BS's way of reintroducing ourselves to the community. We have been working on these issues since 2008.  However, after a brief hiatus in 2014, we wanted to make sure that the community of Imperial Beach knew that we were still here to help. We will continue to work tirelessly and do our part to bring about necessary change. 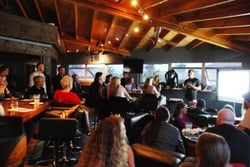 It was an encouraging and inspiring evening. The room was packed with Imperial Beach residents, business supporters and Surfrider volunteers from all over the county. Our host, Barrel's Restaurant & Lounge was gracious and accommodating, demonstrating that they care about the health and well-being of their community. There were so many local businesses in the region that supported our event through raffle prize donations; PuraKai, Suzie's Farm, Surf Hut, Katy's Cafe IB, Niederfrank's Ice Cream, I.B. Street Tacos and YMCA Chula Vista. Even businesses outside of the immediate region chipped in to help; Coconut Aroma Massage Therapy, San Diego Whale Watch, Trace3, and San Diego-based reggae band, Tribal Seeds. A special thanks to our volunteers who spent their time to help bring the evening together. 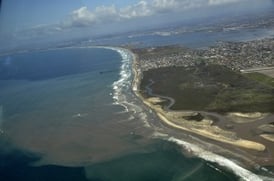 While there have been significant improvements over the last eight years in the Tijuana River Valley, there is much work to be done. The Tijuana Sloughs at Border Field State Park and the Imperial Beach shoreline is closed approximately 50% and 20% of the year, respectively. Last week's rainfall, which resulted in sewage flowing through the Tijuana River Valley and into the Pacific Ocean, closed our south county beaches from the border north to Coronado. The health and wealth of our ocean and these communities are at stake. However, together we can continue to make a difference.

The No Border Sewage (No BS) Committee is hosting a cleanup at the Dairy Mart Bridge on Sunday, June 28th from 8am-12pm. Mark your calendars, join us and be part of the solution! Lunch will be served to all cleanup participants by the Outlets at the Border through Panda Express, Cinnabon, Auntie Anne's Pretzels and Carvel Ice Cream. And thank you to our amazing sponsor PuraKai for participating and making our cleanups possible. Check out their environmentally responsible apparel and purchase a No BS t-shirt in Men's or Women's) to support the No BS committee. Click here for more information about the June cleanup, including directions.

The No BS committee meets the first Tuesday of every month at the Surfrider office (9883 Pacific Heights Blvd, Ste D, 92121 - unless otherwise noted) from 6:30-8pm. All are welcome. Contact us at nobs@surfridersd.org for more information.