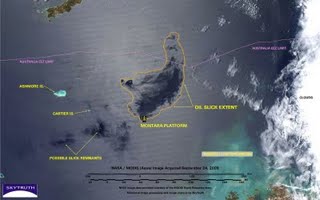 Residents living along the coast of West Timor in East Nusa Tenggara (NTT) are worried about the impacts of an oil spill in the Timor Sea originating from a leaking well head in Australia.

A Kolbano resident, Daniel Missa, said dozens of residents had experienced nausea and skin irritation after eating dead fish found along the beach.
"Residents didn't know why the fish were dead, so they picked them up and ate them. They apparently suffered from itchiness, felt nauseous and vomited," said Daniel.
A fisherman in Oesapa subdistrict in Kupang, Ridwan, 34, who had just returned from fishing in the Timor Sea on Monday, said that the sea was filled with a crude oil slick.
"The surface of the sea is covered by masses of crude oil resembling sand," said Ridwan. A large part of the slick is in Indonesian waters, he said, but so far none of the authorities have taken responsibility for cleaning the oil spill. "Eight of my colleagues and I saw with our own eyes the dead fish floating on the surface at a distance of around 300 kilometers, emitting a foul smell," he said.
The Montara oil field, located around 690 kilometers west of Darwin, North Australia, and 250 kilometers north west of Truscott in Western Australia, exploded on Aug. 21, releasing huge volumes of crude oil across waters in the region. The oil spill, reaching a volume of 500,000 liters per day, is moving close to Timor Island, located only 70 nautical miles from the oil field.
"The oil slick is expected to arrive in Kolbano, a densely populated area in South Central Timor regency, by the second week of October," said West Timor Care Foundation director Ferdi Tanoni at a press conference in the provincial capital of Kupang on Wednesday.
Read More