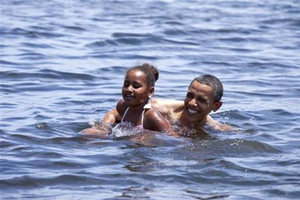 In a stunt that was well covered by the media over the weekend, President Obama made a big deal about swimming off the coast of Florida on Saturday and declared the Gulf area's beaches "open for business," trying to show by example that a region hit by the BP oil spill was safe for tourists to enjoy.

However, there is a catch. Obama didn't really swim in the Gulf. Instead, it turns out the President swam in St. Andrews Bay, a freshwater bay that is fed mostly by adjoining creeks and springs and wasn't nearly as affected as the beaches off the coast of Louisiana.

Yet another stunt to try and down play the severity and impact of the gulf oil spill.