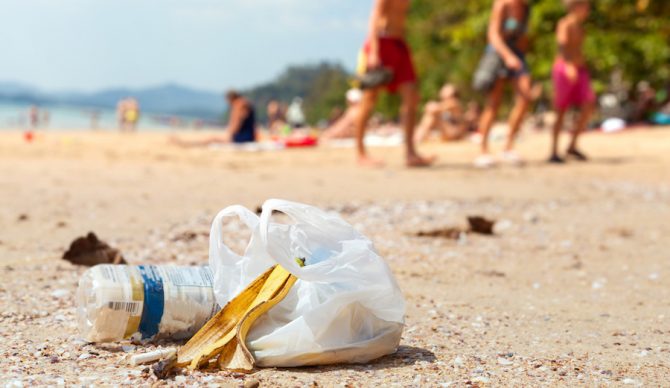 By Rise Above Plastics Committee

The Battle Against Plastic Bags in California; A Brief History

Of the 17 measures on this November’s ballot, two in particular deal specifically with California’s statewide plastic bag ban.  Prop 67 presents a fairly straightforward referendum; Prop 65, on the other hand, is a deceitful measure designed specifically to trick us. As the outcome of these measures will determine if California enacts the nation’s first statewide single-use plastic bag ban, let’s take a brief look at how we got here. 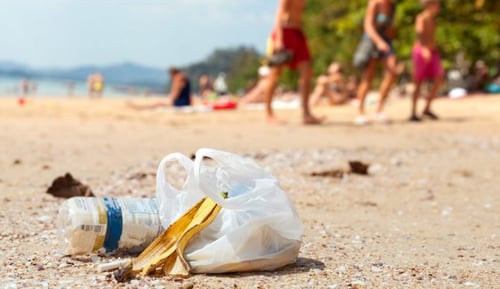 Plastic bags, which enjoy only 12 minutes of use on average, do not biodegrade & are a frequent source of litter. Of the 14 billion used each year in California, less than 5% are recycled. The rest end up in landfills, on the streets, or worse, in our oceans and waterways where they devastate marine life.

San Francisco passed the first single-use plastic bag ban in 2007; other Bay Area and coastal cities quickly followed suit. With these bans came wide media exposure, and several studies showed significant reductions in plastic waste in cities that adopted them.  San Jose, for example, reported that their 2011 ordinance reduced bag litter by "approximately 89 percent in the storm drain system, 60 percent in the creeks and rivers, and 59 percent in City streets and neighborhoods.”

Sacramento took notice. While the first attempt at a statewide ban failed in 2010, local ordinances continued to spread like wildfire up and down the state.  By 2014, over 130 local cities had bag bans in place. The tides had turned.  Senate Bill 270 (SB-270) cleared the CA Assembly on August 27, 2014.  A month later, Governor Brown signed the nation’s first statewide single-use plastic bag ban into law.

California’s bill is modeled after the local bans. Large grocers and pharmacies would be required to do away with single-use plastic bags at checkout (with convenience stores to follow after one year).  Instead, reusable and/or recycled paper bags would be offered for 10-cents each. The fee reimburses retailers for replacing their plastic bags (1-2 cents each) with more expensive paper and reusable bags (10-15 cents each).  It also incentivizes customers to bring reusable bags when they shop. A 2014 exit survey in Palo Alto - which passed an ordinance in 2011 - showed only 23.9% of customers using store-bought paper bags. The remainder had a reusable bag, or no bag at all.

The plastic bag industry reacted quickly and forcefully to the passage of SB-270.  In addition to losing approximately $15 million annually in California, the bill would set a precedent for other states to follow.  The American Progressive Bag Alliance (APBA) - a lobby whose sole purpose is fighting plastic bag bans - spent $3 million on raising signatures to stall SB-270 and force it to a popular vote. 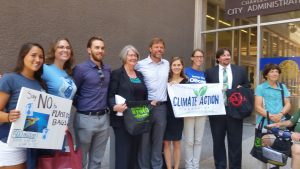 Here in San Diego County, Solana Beach passed the first bag ban in 2012. They were followed 2 years later by Encinitas, then Del Mar. Last month, San Diego became the 150th city to pass a local ban. Oceanside became the 151st only two weeks later. Surfrider activists played a role in passing all of these local bans.

Which brings us back to the present.  SB-270 is now Prop 67; a YES vote upholds the law and allows it to go into effect.  But the APBA didn’t stop there - since polls show a majority of Californians support SB-270, they spent another $2 million to put an additional measure on the ballot. Under Prop 65, retailers would no longer keep the 10-cent bag fee.  Instead, it would be redirected to a special environmental fund administered by the Wildlife Conservation Board.

On its face, Prop 65 sounds pro-environment… but it’s a trick.  Plastic bag manufacturers hope to undermine businesses’ support for Prop 67 by making them bear the full cost of more expensive, recycled paper bags. It would also erode the public’s support, by turning the 10-cent fee into a government tax.  Taxes are unpopular, especially when they steal money from local businesses.

Single-use plastic bag bans have been highly effective in reducing plastic pollution & encouraging sustainable consumer behavior; it stands to reason that our statewide ban will have the same effect.  Prop 67’s thoughtfully crafted legislation has the support of key players in both the environmental & business community, which is a rare thing. Prop 65, on the other hand, was written by plastic bag manufacturers to deceive voters into sabotaging the statewide ban.