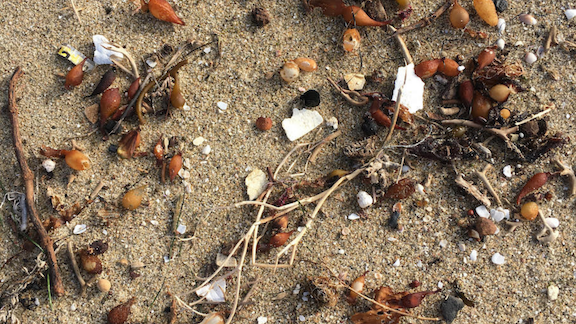 A few months after the ordinance went into effect, the California Restaurant Association, Dart Container Corporation, and three restaurant owners filed a lawsuit against the City of San Diego. They claimed the City should have conducted an Environmental Impact Report (EIR) on any potential negative impacts of phasing out EPS foam.

Yes, you heard that right. A state restaurant lobbying group and Dart—one of the nation’s largest manufacturers of EPS foam takeout containers—argued that doing away with foam takeout would have potentially negative environmental impacts. Their trump card? Since EPS foam is so lightweight, any alternatives would be heavier and require more gasoline to transport.

As most Surfrider volunteers know, EPS foam is one of the most offensive single-use plastics ever to litter our streets, shores, and ocean. Due to their light weight and brittle nature, disposable foam products blow around and break up into hundreds of smaller pieces, making them notoriously difficult to clean up. Foam takeout, packing peanuts, coolers, etc., have consistently ranked as top items picked up by Surfrider beach cleanup volunteers.

Also worth mentioning is that 100+ California cities had already enacted similar foam bans when the San Diego City Council moved forward with theirs. The first city to ban foam takeout, Berkeley, did so in 1988. None conducted an EIR, and none were legally challenged. For reasons we can only conjecture, the plastic industry decided to make a stand here in San Diego.

The lawsuit development put our chapter in an awkward position. In California, EIRs are conducted per a landmark 1970 environmental law, the California Environmental Quality Act (CEQA). CEQA is intended to inform both government decision makers and the public about potential environmental effects of proposed activities, development, etc., and to prevent “significant, avoidable environmental damage.”

Organizations like Surfrider rely heavily on CEQA to ensure development projects receive a proper environmental review. The review process includes giving the public, often represented by us and other environmental non-profits, a chance to weigh in and comment before a policy or development’s approval.

Many California environmentalists support and depend on CEQA to do advocacy work. Even if we felt our industry opponents were employing CEQA as a stalling tactic, we wouldn’t argue against the CEQA process. Environmental review is fundamental to our work.

Also, we felt confident that the EIR results would support our case against foam, effectively putting to rest any future challenges to foam legislation in California (including for statewide legislation). When the City decided to conduct the EIR rather than face a costly lawsuit against Big Plastic, our chapter had little choice but to go along with it (albeit begrudgingly).

Then Covid hit, and everything else – including the foam ban project EIR—ground to a halt. We’ve periodically followed up with the City during this time, but it’s been slow-going due to Covid’s resounding effect on City services. In the end, thanks to their lawsuit and the unexpected arrival of a global pandemic, the plastic industry gained almost three additional years of “business as usual” in San Diego.

Which brings us to December 2021, when the City finally released their Project Draft EIR for the foam ban (officially called the Single Use Plastic Reduction Ordinance). Thankfully, the bulk of the draft EIR is what we expected. The myriad environmental benefits of banning foam takeout far outweigh the one potentially negative consequence, a local increase in greenhouse gas emissions (GHGs). Furthermore, the EIR states that any increased GHG emissions would be short-lived due to statewide strides toward greater fuel efficiency, and ultimately, electric vehicles.

Before the public comment period ended on January 24th, our chapter submitted a detailed letter in support of the Draft EIR’s favorable conclusion for banning polystyrene takeout containers. The EIR authors will take public comments into consideration before publishing their final report. Once published, the current City Council must re-agendize and approve the single-use plastic ordinance for it to become law. While we cannot predict how long this process will take, we hope to get the ordinance in front of the City Council by Memorial Day (May 30).

Our public comment letter supports the EIR's conclusions, offers add'l evidence and clarifications, and is co-signed by our coalition partner, San Diego Coastkeeper.

Back in 2018, Surfrider San Diego activists led a broad coalition of environmental and business groups in a successful advocacy effort to get this ordinance drafted and passed. We owe it to our volunteers, coalition partners, and the entire San Diego coastline to stay the course. Make no mistake, our chapter will remain in this fight until the City’s single-use plastic ordinance is back on the books.