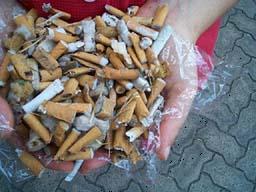 They have two parts: a plastic filter and the remnants of a smoked cigarette.

They’re considered the No. 1 littered item in the world, and more than 1 million are collected annually in beach cleanups nationwide.

So said San Diego State University researchers who are trying to build a case for labeling cigarette butts as toxic hazardous waste. That tag would prompt more rules to reduce their presence in the environment, though the bigger effect may be in public perception.

The San Diego scientists will present their conclusions today ﻿at the 137th ﻿annual meeting of the American Public Health Association in Philadelphia. They have submitted their results for publication in a peer-reviewed journal.

“It’s another way of looking at cigarettes as a societal hazard,” said Tom Novotny, ﻿a professor of public health at SDSU. “If we reframe the butts as toxic hazardous waste, that adds another opportunity to change the social acceptability of smoking.”

“This is just another attack on smokers and an attack on the entire tobacco industry, including farmers and distributors, in the midst of an economic crisis,” Best said. “We already have littering laws in the state of California that say you cannot throw any trash out on the ground or in the waterways.”

In recent years, community and health activists have won bans on smoking at beaches from California to New Jersey. Lawmakers acted partly out of concern about secondhand smoke and partly to reduce the amount of cigarette butts discarded at parks and other places. In July, San Francisco added a 20-cent fee to each pack of cigarettes to cover the cost of collecting spent smokes.

Novotny and his collaborators in the Cigarette Butt Pollution Project want more controls on what they call the most littered object on Earth. Trillions of cigarettes are smoked worldwide each year, and more than 1 million butts are collected annually during coastal cleanups in the United States, according to the project.

Novotny wondered about the butts’ effects on waterways. He turned to Rick Gersberg, a professor of public health at SDSU who specializes in water pollution.

Gersberg, a former smoker, was intrigued enough to review the scientific literature and determine that there were no published studies addressing cigarette butts and fish.

It’s different “if I pour a little vial of carcinogenic chemicals on the street — just a tiny amount,” Gersberg said. “(But if) hundreds of thousands of people were doing so many times a day, wouldn’t someone worry about it? Probably so.”

Gersberg helped design an experiment in which he let smoked filters soak in containers of water for 24 hours. Then he put fish in the polluted water and monitored them for five days, part of what he called a standard hazard assessment.

Half the fish died in both salt and fresh water, Gersberg said.

The bigger question is whether cigarettes have a similar effect in the real world — something that hasn’t been evaluated.

“We’d like to look at the chemicals that are actually causing the toxicity and if they are accumulating in marine life,” Gersberg said.

The $110,000 study on cigarette butts included policy analysis and biological research. It was funded by the California Tobacco Related Disease Research Program, a University of California ﻿effort to reduce the health and economic costs of tobacco use.

The nonprofit Surfrider Foundation is trying a different approach. On Saturday, ﻿the group’s San Diego County chapter will hold its sixth annual “Hold Onto Your Butt” awareness program. The event will include demonstrations and giveaways at three beach communities in the region.

The SDSU research gives Surfrider more ammunition. “We have thought for a while that toxic chemicals leach from discarded butts when submerged in water, so it’s good in some ways to see confirmation,” said Bill Hickman ﻿from the group’s local chapter.