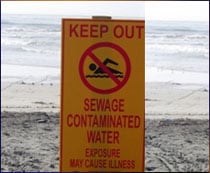 SAN DIEGO - An influx of sewage from the Tijuana River prompted an ocean contamination warning stretching from the U.S.-Mexico border to the northern limits of Imperial Beach Tuesday.

Field measurements indicating northward-flowing pollution near the mouth of the Tijuana Estuary prompted the alert, according to the San Diego County Department of Environmental Health.

Signs cautioning the public about the contamination will stand along the affected beaches until follow-up tests determine that they are safe again for recreational uses, the DEH advised.