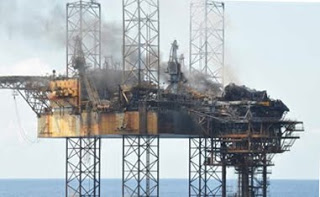 Of course, a good deal of oil that’s already leaked still has to come up to the surface, and the pollution resulting from the spill is spread out over tens of thousands of square miles. The environmental impact of the spill is likely to persist for decades – long enough for another spill to take place, unless a moratorium on offshore drilling is put into effect.

But hey, let’s look on the bright side. The Montara offshore drilling platform did not collapse into the sea. It just turned into a melted, oily, twisted, smoking, disgusting, useless heap.