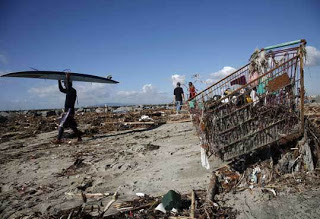 SEAL BEACH, Calif. - The sky was blue and the sun bright for the first time in days after a week of powerful Southern California rain storms, but all Victoria Macey could see was the mountain of steaming trash and twisted debris on her favorite beach.

"I'm completely shocked. From our house, all we could see was gorgeous clouds and then we come down here and there's so much trash, it's really sad," Macey said as she photographed a sopping plastic baby doll propped atop an overturned end table. "I can't believe how many shopping carts there are. That's what blows my mind."

The mounds of soggy sofa cushions, rusted shopping carts, plastic children's toys, dented refrigerators and hundreds of plastic cans and food wrappers were just one calling card left by a week of punishing rain that pelted Southern California and went on to tangle with Arizona and New Mexico.

About 35 miles to the north of Seal Beach, hundreds of residents who evacuated from wildfire-scarred communities in the San Gabriel Mountain foothills north of Los Angeles returned home Saturday to assess the damage and remove mud and debris from their properties. There were no reports of major damage despite widespread concerns about mudslides and debris flows from the relentless rain.

About half of the 500 residents of a small western Arizona farming community who were evacuated after floodwaters swept through the town Thursday, returned Saturday. Muddied streets and damaged homes and businesses remained, and La Paz County sheriff's spokesman Lt. Glenn Gilbert said the community was in cleanup mode. Many said they were happy to survive the storm.

On Saturday, the Yavapai County Sheriff's Office announced the body of 6-year-old Jacob Baudek, who was swept away by rising by floodwaters in central Arizona Thursday, was spotted by hikers along the Agua Fria River and recovered from the river bank.

At higher elevations, forecasters warned of blowing and drifting snow and issued winter weather and wind advisories for southern New Mexico, with heavy snow expected in the Gila and Sacramento mountains. In the Guadalupe Mountains of southeastern New Mexico, wind gusts could top 90 mph on Saturday. More than 2 feet of snow have fallen in the Chama area in northern New Mexico, while parts of southwestern New Mexico got 27 inches of snow.

In Northern California, a rare tornado warning was issued Saturday in the San Francisco Bay area's Contra Costa County after a trained weather spotter reported seeing a funnel cloud. The National Weather Service said the cloud was seen about 9 miles south of Oakley, but it weakened without touching down and the agency's warning expired.

Harsh winter weather also hit the Dakotas, where thousands of people were without power after icy weather toppled miles of power lines. A winter storm carrying freezing rain and snow pushed through the region with blizzardlike conditions expected to develop over the weekend and into Monday.

But that storm was the farthest thing from the minds of weather-weary Southern Californians, who ventured to the region's famous beaches by the dozens on Saturday to bask in the sunshine and balmy temperatures. Many were shocked to find the trash from the storm's urban run-off and picked gingerly through tangled garbage to reach the water.

Fifty-two cities in the Los Angeles metropolitan area drain into the San Gabriel River bed and litter and garbage flow tens of miles to the ocean each time there's a heavy rain, said Kim Masoner, who founded Save Our Beach 10 years ago to combat the problem. Earlier, the couple worked with more than 1,400 volunteers to remove 12 large trash bins of debris from the river's mouth.

On Saturday, Steve Masoner pulled a waist-high white plastic rocking horse from the mess and propped it on the rocks lining the river mouth. His wife added a soggy Spiderman doll and a cracked SpongeBob SquarePants bike helmet and a swimming pool skimmer to the pile before helping her husband wrestle apart two shopping carts.

Similar scenes played out on beaches in Long Beach, Newport Beach and San Diego where the Los Angeles, Santa Ana and Tijuana rivers empty into the sea. Many surfers said they would avoid the water because of concerns about bacteria from storm run-off.

Meanwhile, the Surfrider Foundation canceled its beach cleanups through the end of the month near the Tijuana River because the hazardous waste created too much of a liability.

"Even if they do have gloves and masks, it's too dangerous," Dan Murphy, of Surfrider, said of the beach volunteers. "Whatever the trash is on the beach, it's been flowing in the sewage and it's covered with the stuff."