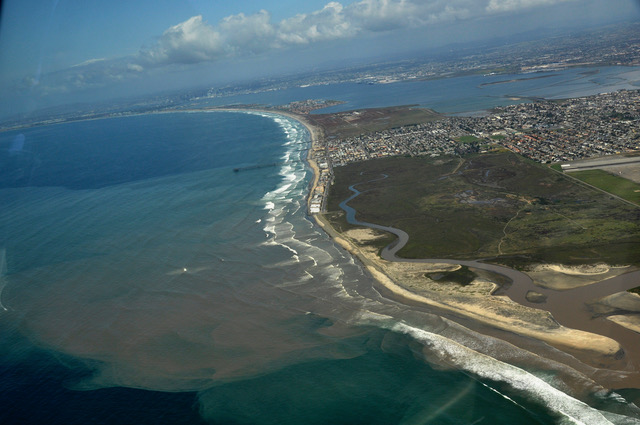 The Surfrider Foundation is very pleased to announce the successful resolution of our Clean Water Act lawsuit to address the decades-long problem of water pollution at the U.S.-Mexico border. Today, the parties finalized a settlement of the lawsuit that will: 1) improve overall water quality; 2) strengthen monitoring, communications, and reporting efforts; and 3) advance infrastructure improvements and pollution response efforts.  Ultimately, this settlment will address the severe pollution that threatens public health, the environment, local economies and our communities in the border region.

Surfrider filed suit against the U.S. International Boundary and Water Commission on July 17, 2018 to address the rampant and egregious water pollution flowing from the Tijuana River and significantly contaminating the Tijuana River Valley and the Pacific Ocean off the coast of southern San Diego County. Surfrider used Section 505 of the Clean Water Act to file a citizen suit against the federal agency to address water quality violations under their National Pollutant Discharge Elimination System (“NPDES”) permit, as well as unpermitted discharges prohibited by the Clean Water Act. Pollutants, such as sewage, chemicals, heavy metals, physical trash and other contaminants, flow through the Tijuana River Valley’s flood conveyance structure and the canyon collectors at a rate that forces closures of the abutting U.S. coastline nearly 300 days per year due to the dangerous pollution.

Surfrider has worked jointly with many parties in three related cases, including the plaintiffs: San Diego Regional Water Quality Control Board, City of Imperial Beach, City of Chula Vista, Port of San Diego, City of San Diego, and California State Lands Commission and Defendant U.S. International Boundary and Water Commission. Together, we have worked to reach a strong global settlement, incorporating feedback from chapter campaign leaders, local community stakeholder partners, and experts in our Surfrider network.

The lawsuit has been ongoing for nearly four years, and has been very effective in ushering forth solutions to the pollution crisis at the U.S.-Mexico border. Early in the lawsuit, the federal government defendant tried to dismiss the case claiming sovereign immunity; however, in December 2018, the U.S. District Court for the Southern District of California denied IBWC’s motion to dismiss, allowing the suit to proceed. Shortly thereafter, the U.S. federal government decided to take stronger action on the decades-long border pollution issue and included $300 million in a major trade agreement through the United States-Mexico-Canada Agreement (USMCA) to identify infrastructure solutions and address transboundary flows. The USMCA required U.S. Environmental Protection Agency (“EPA”), in coordination with other public entities, to carry out the planning, design, and construction of high priority water treatment works in the Tijuana River watershed to address transboundary flow pollution.

On November 8, 2021, the EPA announced its intention to move forward on a bold solution to address transboundary water pollution. The EPA chose the Combined Infrastructure Solution (“CIS”) Alternative I-2 after substantial analysis and public input. The CIS combines several individual projects that together will reduce sewage in canyon flows, sewage discharged to the coast, and wastewater in the Tijuana River.   The project includes a 35 million gallons per day (“MGD”) expansion of the existing South Bay International Wastewater Treatment Plant and a new 60 MGD primary treatment plant, both on the U.S. side of the border. It will also improve canyon collector functions, allow for water reuse and improve capture of polluted water south of the border, as well as add at least a 5 MGD treatment plant at the San Antonio de los Buenos coastal outfall on the Mexican coastline. These improvements are expected to reduce the amount of beach closures due to water quality impairment by 95% in the summer. The new sewage capacity is anticipated to accommodate population growth until 2050. The plan is also designed to provide the U.S. more oversight to treat wastewater and ensure sewage stays out of the river and ocean. Surfrider was pleased to see the CIS closely reflect the stakeholder solutions that the San Diego Chapter worked hard to develop over the past four years.

Despite the assurance of a large, comprehensive solution by the EPA last fall, the lawsuits against IBWC were still ongoing and so negotiations ensued over the past six months to ensure a strong resolution to the litigation. In exchange for dismissal of the case (and in light of the USMCA CIS Project schedule), the USIBWC has agreed to:

This lawsuit settlement alongside the EPA’s CIS solution will ensure that over 75% of contaminated pollution flows are reduced year-round, and ensure our San Diego beaches remain open for residents and visitors alike. Ultimately, this settlement will help solve one of the most egregious Clean Water Act violations in the nation and greatly improve water quality and healthy beaches in San Diego County.

“The Clean Border Water Now campaign is proud of the work done by our legal team to ensure that the safety and well-being of our community is put first in this now almost 100 year old issue. We understand that this will continue to be a work in progress as projects are funded and completed, one at a time. We know that the length of time these projects will take will never be fast enough, but we are ecstatic that there is a solution in place. We would like to thank the hundreds of people who continue to advocate for the Tijuana River Valley, the Imperial Beach and Coronado shorelines, for Tijuana residents and the coast of Northern Baja, and sincerely appreciate the thousands of hours dedicated to this process. In addition, we would like to thank our elected officials from the South Bay for listening to our concerns, and the leadership of the California Border Patrol and its union for touring the border with us time and again so that we were able to better advocate for the safety of their coworkers as well as the surrounding communities.” - CBWN Committee Chair Bethany Case, Surfrider Foundation San Diego County Chapter.

The Surfrider Foundation has been well-represented by Jiaxiao Zhang and counsel at McDermott Will & Emery, The Law Office of Jennifer F. Novak, as well as staff Senior Legal Director Angela Howe.

The Clean Border Water Now campaign is ongoing and looking for active members to monitor the implementation of the water quality solutions, including the Settlement Agreement terms and the USMCA solution. There is also a need to advocate for full funding of the USMCA Comprehensive Infrastructure Solution.  To activate on this issue and/or find volunteer opportunities locally, check out our chapter's Clean Border Water Now page.