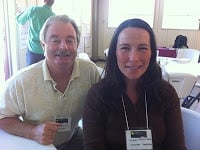 The oil spewed for nearly 3 months.  Over 200 million gallons of oil poisoned the Gulf, and approximately 2 million gallons of chemicals used to disperse oil exasperated the situation--resulting in the worst  U.S environmental disaster.  The madness stopped on July 20 when the renegade well was wrestled down. Shortly afterward, the rest of the world "went about its business"--and the federal government (including President Obama) began peddling the notion that the Gulf was safe.

A few months after the spill, the Surfrider Foundation was contacted by Chuck Barnes, Director of Eastern Surfing Association (Alabama District).   Chuck informed us that he and several people became ill after surfing in mid-September.  Remember, at this point, the federal government was encouraging people to recreate and eat seafood. At the time, I was planning a trip to the Gulf to participate in a conference and I invited him along.  The conference, called the Gathering in the Gulf, was a "meeting of the minds" of local and national Non-Governmental Organizations (NGOs) (including faith based, local fishermen, scientific, public policy, and other diverse organizations).
The conference was basically a 'needs-assessment' of how NGOs should go forward.  We spent several days hammering out a set of principles that illustrated a unified vision which would guide our work towards restoring the Gulf.  The principles, named "the Weeks Bay Principles" is a laconic document that says it all.  It encapsulates what the locals want and represents the larger picture of how those in Washington DC can help.  Read it here.
Before visiting the region, I wrote an article predicting what would happen in the Gulf during 2011.  Little did I know, some of my predictions were already happening!  During my trip, I heard horror stories about illnesses.  There are accounts of children being sent home by school nurses because of blisters in the noses, sore throats, and skin rashes due to oil and dispersant vapors/remnants.  Fishermen are feeling the same symptoms.  In fact, one fisherman attending the conference volunteered for a blood test that tested positive for chemicals related to oil and dispersant in his system.  One lady told me that after a "dusting of Corexit" (the dispersant used to break up oil) she got sick from swimming in her pool (and her house was several miles away from the coast).

But the surfer's stories were most unique.  They are the "canaries in the coal-mine".  They are in the water several times a week (And why not?  The federal government is encouraging them to).  All of the surfers I spoke with complained of throat/nose/ear problems, accompanied by skin rashes, and burning eyes/lips after surfing during a large swell. One surfer said: “For us, the swell is great because it kicks up surf, but now it’s not just kicking up surf, it’s bringing a “cocktail mix” of oil and dispersant to the surface”.

One day, I went to Gulf Shores, AL to examine the beaches and meet some locals.   I ran into families who traveled hundreds of miles to take a vacation there.  Even though their “summer vacation” was canceled because of the spill, they were determined to vacation on the white sandy beaches.  They said they would spend more of their time “on the beach” and not necessarily in the water. One local woman said she didn’t think pregnant women and young children should swim.

After talking to locals and vacationers, I spent some time at a local surf shop ( Blonde John’s Board Shop).  The business is usually lucrative, but since the spill the owner had witnessed a massive decrease in revenues. One of the shop managers, volunteered his boat to help BP clean up the oil.  While he was compensated for his time, he did miss several days of work and, as a result, lost income.
The economic and environmental unrest plaguing the Gulf goes back to Hurricane Katrina.  I cannot count how many times I heard people say:  "we’re still recovering from Katrina".   An ex-fishermen turned environmental activist said he was wiped out after Katrina.  He had lost his boat and morale--he said because of his age he didn’t have the energy (or funds) to start all over again.   Essentially, he became a community activist over night. He claimed that when the BP spill happened, he was already prepared to help himself and others.
The oil didn’t just ruin the white sandy beaches--it ruined important fisheries.  In fact, just last week another local contacted Surfrider about throngs of dead fish washing up on Grand Isle beach. The sad thing is, most in the region are still consuming seafood.
Current monitoring by the federal government is inadequate and does not test for toxic heavy metals or dispersants. The onus is on the Food and Drug Administration to prove seafood is safe.  Considering the Gulf provides 86% of the U.S. shrimp harvest, and 56% of the U.S. oyster harvest--we need evidence it's safe!  As for water quality, there are still millions of gallons of oil and dispersants in the water.  Even though the government is swearing the water and the air is fine, people continue to be sick. We need a parallel process running along side what the government is “doing”.  Surfrider has stepped up to assist.  Our Emerald Coast Chapter has been testing the water for months; see a recent blog about a positive result discovered.  And we plan to conduct further testing in the Gulf and continue to assist other NGOs.
In the end it all comes down to politics (just like everything in life).  Nearly 90% of people I spoke with in the Gulf said they do not feel represented by their local government and most politicians will not push back on the oil and gas industry because they fear losing political contributions.  It seems few politicians in the region are willing to "stick their neck out".

Despite feeling crestfallen, I found hope within a catch phrase locals are using.  This self-empowering quote goes:   “The oil is still here; so are we, and we vote!!”   So take that, politicians! A bunch of fired-up, self-empowered locals are watching you and running a "parallel process" outside of the "work" you are doing.