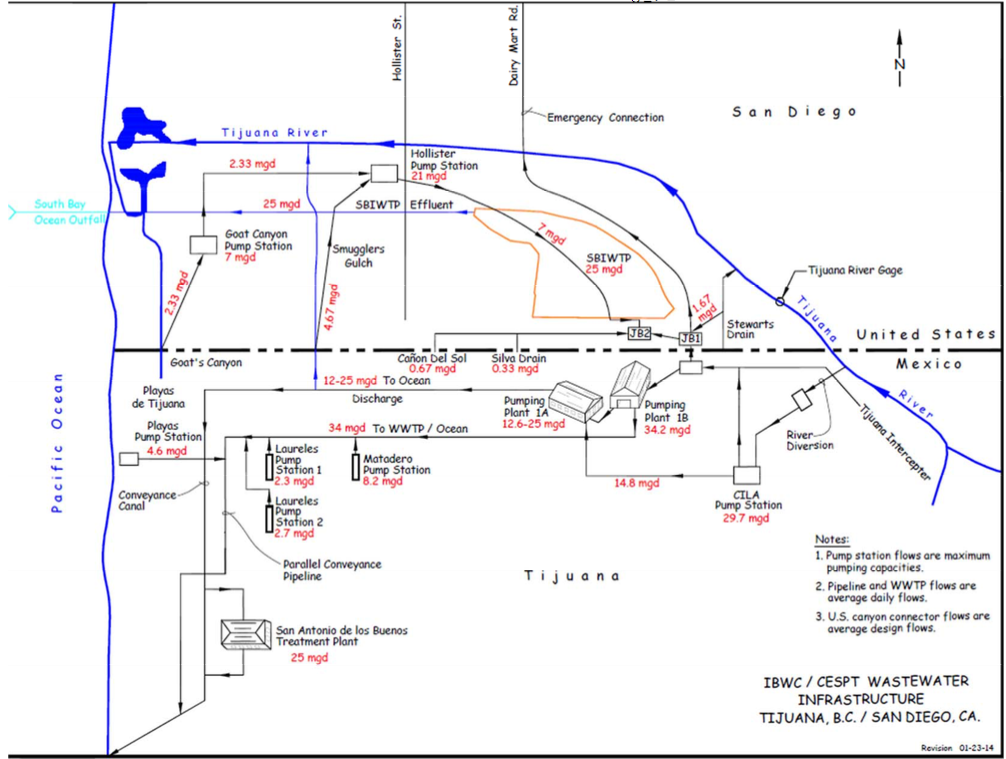 The Surfrider Foundation, represented by the law firm of McDermott Will & Emery, today announced that it intends to file a citizen suit against the U.S. International Boundary and Water Commission (USIBWC) for repeated violations of the Clean Water Act, including violations of the National Pollutant Discharge Elimination System (NPDES) permit it holds in relation to its operation of the South Bay International Wastewater Treatment Plant (SBIWTP). The Surfrider Foundation sent the 60-day Notice of Intent to Sue letter to address egregious violations of water quality regulations. The USIBWC’s mismanagement and inaction on trans-boundary contamination has resulted in beach closures, the reported human illness of residents and Border Patrol agents, negative implications for local businesses and contamination of the Pacific Ocean.

Trans-boundary border sewage flows, unknown chemical pollutants and an increase in plastic debris travelling through the Tijuana River Valley have plagued South San Diego County for decades. This ongoing chemical contamination has resulted in illnesses, beach closures and impacts to the fiscal health of neighboring cities. The contamination also poses a threat to the health and safety of the California Border Patrol and the U.S. Navy, which train in this area. For the last decade, the Surfrider Foundation has been an integral part of trying to identify solutions to continued contamination of the Tijuana River Valley by participating in the Minute 320 water quality working group, the Tijuana River Action Network, the IBWC Citizens Forum and the Tijuana River Valley Recovery Team, amongst others. Surfrider has also urged all levels of government to take action on this issue.

In February 2017, failures of the Mexican sewage infrastructure caused a massive contamination of sewage that polluted and closed beaches from Imperial Beach to Coronado. More than 143 million gallons of raw sewage spilled in the Tijuana River and ultimately the Pacific Ocean. This event affected hundreds of Imperial Beach and Coronado residents who have been forced to live with contamination affecting their homes, neighborhoods, favorite beaches and open spaces. More than 450 days have passed since the spill and yet there have been no long term solutions proposed to remedy the problem on the U.S. side of the border.

Surfrider has been actively advocating for clean water in the Tijuana River Valley for the past decade. In 2010, Surfrider was an integral part of the formation of the Tijuana River Action Network of non-profit groups on both sides of the border. We have also actively participated in many governmental stakeholder meetings. We have led month-long clean-up activities in the Tijuana River Valley, organized community presentations, tours, outreach efforts and public education on the issue. After the massive sewage spill in February 2017, Surfrider decided to step-up our efforts. Among other things, we implemented a water quality testing program called the Blue Water Task Force (BWTF). Thanks to a grant received from Las Patronas, Surfrider was able to purchase two water quality labs, one of which is currently hosted at Mar Vista High School in Imperial Beach where students are able to run weekly water quality tests at local beaches. We are currently fundraising to purchase a third lab set to place at Coronado High School. The South Bay Clean Water Movement - No Border Sewage Campaign is ramping up efforts to protect clean water and healthy beaches by organizing an awareness campaign on the issue. Surfrider's members are all too aware of the water quality degradation in the Tijuana River Valley that is not being sufficiently addressed by the current level of USIBWC efforts.

The USIBWC is a federal government agency with the mission of providing solutions regarding sanitation and water quality in the border region. The USIBWC has failed to achieve their mandate and has continually allowed flows of untreated raw sewage, chemical pollutants or plastic pollution to enter the Tijuana River Valley. The community has waited too long for solutions to this increasingly dangerous problem, and the Surfrider Foundation is now suing to compel the USIBWC to act.

The Surfrider Foundation will have the ability to file a complaint in federal district court for these Clean Water Act violations if they are not addressed in the 60-day notice period. A link the Notice of Intent to Sue letter can be found here.

The Port of San Diego, City of Imperial Beach and City of Chula Vista filed a complaint under the Clean Water Act and Resources Conservation and Recovery Act in early March of this year, and the California State Water Resources Control Board also issued a Notice of Intent to Sue to the IBWC this week for the Clean Water Act violations. Surfrider Foundation, though this litigation, seeks to compel wastewater infrastructure upgrades for the Tijuana River Valley, including specifically, those that improve interception and diversion of solid waste, wastewater collection and treatment, and water quality monitoring with timely public notification of contamination. This is a complex issue, but Surfrider Foundation is dedicated to driving a solution!

Members of the public can help support Surfrider Foundation San Diego's efforts to advance policy for this issue while driving national awareness and outreach, by supporting our Clean Border Water Now! fundraising campaign.