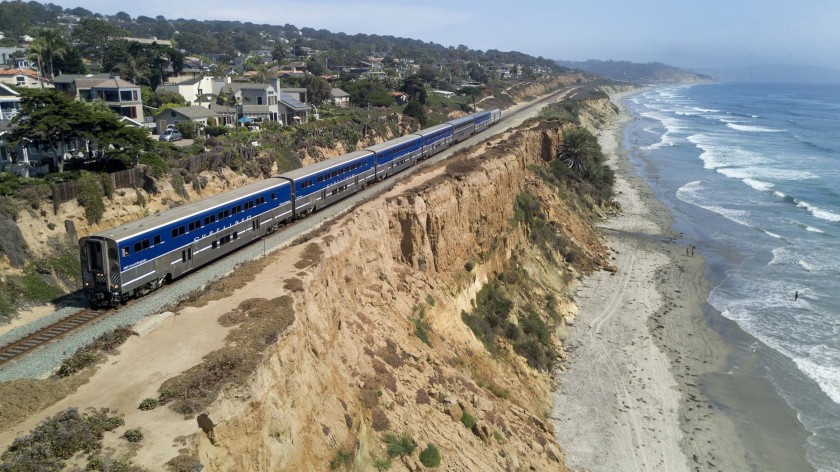 Surfrider is committed to protecting coastal access and the bluffs and beaches in Del Mar. We have followed issues related to the North County Transit District’s (NCTD) request to override environmental review for activities in Del Mar since NCTD filed its petition for a declaratory order with the federal Surface Transportation Board in August 2020.

We object to environmental review waivers in general and to the petition that NCTD filed in particular because it would allow major construction projects in Del Mar to avoid review for consistency with the Coastal Act. Massive projects in the area, such as the approved fencing project, ongoing and planned bluff stabilization, and eventual rail relocation in Del Mar, must be in compliance with the Coastal Act so as to avoid, limit, and mitigate impacts to public resources.

NCTD’s request to override environmental review concerns the proposed fencing and potentially bluff stabilization projects along the Del Mar bluffs. The fencing project’s goal is to reduce train collision deaths along the tracks, but it will have a certain impact on coastal access in Del Mar. Surfrider has not taken a position on this issue because the work for this project is being conducted within NCTD’s right-of-way.

Surfrider is involved in the issue because the ongoing and proposed bluff stabilization projects will take place on city, state, state parks, and possible public tidelands that are all outside of NCTD’s right of way. Bluff stabilization work will potentially drastically alter Del Mar’s bluffs and beaches and take place on land that belongs to the public within the jurisdiction of the City of Del Mar and the State of California. This work must be subject to the relevant laws and policies applied to those jurisdictions — primarily the Coastal Act and the City of Del Mar’s Local Coastal Program.

If the Surface Transportation Board grants NCTD such a broad exemption from environmental review for the fencing project, this precedent would have unknown negative impacts on the bluff stabilization project, in addition to setting a terrible precedent that endangers other coastal areas near railways in California..

The below timeline serves as a record of NCTD, City of Del Mar, Coastal Commission and Surfrider documentation related to NCTD’s petition. For current updates, join our upcoming beach preservation committee meetings. You can sign up for monthly meeting reminders at the bottom of our webpage.

October 22: residents of Del Mar oppose Amtrak’s support statement as it was filed after the deadline to submit

October 26: NCTD requests to rebut other letters, and NCTD files rebuttal to letters of opposition

April 7: STB agrees to hold proceedings in abeyance until December 31, 2021

December 30: NCTD files status report and requests that the STB expedite the proceedings

February 28 - Coastal sends letter to Del Mar & NCTD reiterating that regardless of agreement, the project must be reviewed and approved pursuant to a Coastal Development Permit or concurrence in a Federal Consistency Certification. Coastal provides a licensing agreement Q&A sheet to Del Mar.

Licensing agreement fails at City Council in a 2-3 vote.

March 3 - Coastal submits notice of cease and desist to NCTD, gives deadline of March 7 to confirm they will seek a Coastal Development Permit or a waiver prior to constructing any fencing in Del Mar.

March 4 - NCTD files Supplemental Status Update at the STB, arguing they’re exempt and effectively renewing their petition for declaratory relief from federal consistency review for fencing along their right of way in Del Mar.

March 8 - Coastal responds to STB with status update confirming its continued opposition to NCTD’s petition before the STB, including cease & desist order.

March 14 - NCTD replies to STB in opposition of Coastal’s request for additional briefing.

March 23 - Del Mar residents submit reply to NCTD's Supplemental Status Update, also requesting that STB stay its decision or offer mediation. They argue that "NCTD's emergency for which it urges a quick STB decision is manufactured."

April 26 - Coastal Commission issues motion to NCTD to to hold matter in abeyance (i.e. do nothing) until their litigation against NCTD is complete.

April 29 - NCTD replies to STB in opposition of Coastal Commission's request to hold matter in abeyance.

June 8 - Coastal Commission approves conditional federal concurrence for SANDAG's bluff stabilization project. NCTD fencing is not discussed as it is a separate issue.

July 1 - Del Mar issues response to NCTD's third Supplemental Status Update with the STB, arguing that NCTD is mistaken and that STB should decline to intervene. Letter also states that SANDAG and NCTD have come to agreement re: the terms of the Coastal Commission's conditional concurrence with the  bluff stabilization project.

July 6 - NCTD issues reply to STB in opposition to both Coastal Commission and the City of Del Mar's recent updates, and asking the STB to rule in its favor again re: the declaratory petition.

July 7 - A joint letter is issued to STB from 16 members of the Commuter Rail Coalition in support of NCTD's petition for a declaratory order.   (they refiled the same letter on July 19 after it did not appear on STB's website)

July 21 - Surfrider provides verbal public comment at the NCTD Board of Directors meeting, explains the far-reaching negative implications that a successful STB petition would have not only in Del Mar, but at beaches nationwide by setting the dangerous precedent that railroad operators could bypass local and state environmental review for projects in the coastal zone. The U.S. Army weighs in at the STB with a letter as well; rather than take a position on NCTD's petition, the letter aims to remind all parties that the LOSSAN rail corridor is important to national defense. The Coastal Commission promptly replies with a letter recognizing the rail corridor's importance to national defense.

July 25 - The City of Del Mar replies to NCTD's most recent letter to STB (July 6), calling it an "improper, unwarranted, and repetitive filing that misstates facts and law" among other things. They also call out NCTD for rallying the Commuter Rail Coalition and other rail organizations to their side as desperate and dishonest, since they are based on a misunderstanding of the facts.

July 26 - Surfrider submits followup letter to STB, reiterating our opposition to the NCTD's petition and also arguing that it's completely unnecessary now that the DMB5 project has underwent federal consistency review at the Coastal Commission. We specifically take issue with NCTD's contempt towards the Coastal Commission's conditional concurrence.

Aug 2 - NCTD submits reply,  addresses our letter (Surfrider) + the recent letters from the City of Del Mar and its residents. The letter cherrypicks legal examples of preemption to justify their request.