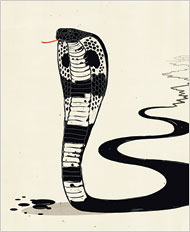 The End of Oil?

Oil is the curse of the modern world; it is “the devil’s excrement,” in the words of the former Venezuelan oil minister Juan Pablo Pérez Alfonzo, who is considered to be the father of OPEC and should know. Our insatiable need for oil has brought us global warming, Islamic fundamentalism and environmental depredation. It has turned the United States and China, the world’s biggest consumers of petroleum, into greedy, irresponsible addicts that can’t see beyond their next fix. With a few exceptions, like Norway and the United Arab Emirates, oil doesn’t even benefit the nations from which it is extracted. On the contrary: Most oil-rich states have been doomed to a seemingly permanent condition of kleptocracy by a few, poverty for the rest, chronic backwardness and, worst of all, the loss of a national soul.
We can’t be rid of the stuff soon enough.
Such is the message of Peter Maass’s slender but powerfully written new book, “Crude World: The Violent Twilight of Oil.”
Read More