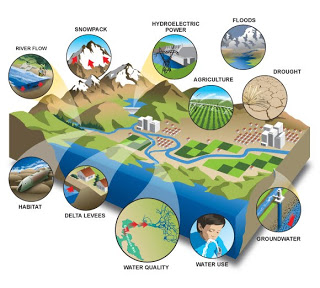 We live in a fragile time and place. Californians started out in 1850 grossly abusing our water resources and we've never stopped.

The difference now, however, is that we can no longer get away with it. The complex, archaic system that California cobbled together to satisfy our competing demands for limited water resources is coming apart at the seams. Physically. Ecologically. And politically.

As we enter the second decade of the 21st century, we are faced with two stunningly different alternatives: disaster or reform. The bad news is that efforts at reform are moving too slowly now to rule out disaster.

It took a nine-year severe drought in Australia to transform how that country manages water. It took the collapse of the apartheid regime in South Africa in the early 1990s to produce a new way of thinking about water rights, allocations and environmental protection. I hope we'll be smart enough to solve our problems before such extreme events occur, but the signs are not good.

Over the past decade, California's water system has been pushed to the edge of collapse. Why? There is plenty of blame to go around: new demands for water, growing populations in the hottest parts of the state, legal decisions to protect a weakened and abused environment, a natural drought made worse by human-caused climate change, an ineffective management system, a conflicted public and ideologically rigid politicians.

Ten years ago, we thought we could continue to increase the amount of water taken from our rivers and groundwater without hurting our natural system. Exports of water from the Sacramento-San Joaquin Delta were boosted to record levels. We tapped the last drops of water from the Colorado River. And we dramatically increased our overdraft of groundwater.

Now we're paying the price and our ecosystems are collapsing. The plummeting populations of salmon, striped bass and other fish in the Sacramento-San Joaquin Delta and other California waterways are just one indication of this collapse.

Ten years ago, scientists were already telling water managers that climate change would have serious consequences for the state's water resources, but nothing has been done to prepare.

Now as temperatures continue to rise, our snowpack is beginning to diminish. As sea-level rise accelerates, our coastal aquifers and wetlands are facing contamination and inundation. And whether or not it rains a lot this winter, the last decade saw seven dry years in a period when the average should have been only three.

Ten years ago, there was an open exchange of ideas under way in public forums and a willingness to use the tools of science and fact in dialogues involving farmers, environmentalists, scientists, water agencies and others. Today, that dialogue has broken down. Facts and science are inconvenient truths generally ignored by politicians, and communication about water issues is almost entirely strident, ideological ranting. All of this has led to a marked worsening of tensions among different entrenched interests.

None of these things will be easy to change. But there are solutions. A sustainable California water future is achievable. Getting there will require a completely different kind of thinking, dialogue and action than we see today.

No single answer will solve our problems. We hear over and over calls for simple 20th century solutions. Build more dams. Let the fish die. Stop growing cotton and rice. Prohibit suburbanites from watering lawns or washing cars. People like these kinds of answers for two reasons: They are simple, and they focus the responsibility on someone else.

But really fixing our water problems is going to require more difficult decisions, agreements and actions by each of us. On the practical side, we must start doing all of the following things: We must measure and monitor and report all water use – both surface and groundwater. We must use our water far more efficiently than we do today, in all sectors.

We must develop new, innovative sources of water supply, including massive groundwater recharge, the complete reuse of treated wastewater, local rainwater harvesting and environmentally and economically sound desalination of both seawater and brackish water. We must price water properly to encourage efficient use and appropriate allocation. And we must reform and enforce water rights allocations.

At the same time, there are several things we must stop doing.

A small number of agricultural lobbyists and their new allies in the right-wing media must stop vilifying and scapegoating the environment while exploiting the plight of the farmworker and local communities in the process. Some urban users and environmentalists must stop generalizing about the wastefulness of farmers. Part of what makes California great is the remarkable bounty produced by farmers on millions of acres of the most productive cropland in the world. Given the right signals and adequate water, California farmers can be the most innovative and efficient growers in the world.

Politicians must stop hiding behind party politics and narrow special interests and come together in the public interest. This means overcoming the tendency to adopt "simple fix" positions without being willing to listen to other ideas. When was the last time that a politician even pretended to have an open mind on a complex issue?

Part of our growing cynicism about politics is the result of the public perception that politicians seem unable or unwilling to be swayed by fact rather than by the priorities of their campaign contributors, paid lobbyists and party ideologues, who have no incentive to find solutions that work for interest groups beyond their own.

But I know we can do better, and I would love to be proved wrong before we're forced to act by a crisis.