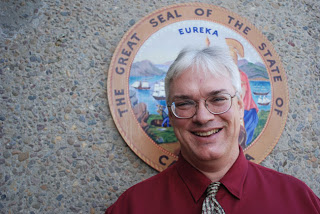 Dave Gibson is the new chief of the San Diego Regional Water Quality Control Board, the agency that's responsible for enforcing federal and state clean water laws locally. He took over the top spot in November from John Robertus, who retired.

He's in charge of the agency that monitors, regulates and occasionally fines those who discharge into local waterways -- from sewage treatment plants to shipyards. Gibson, a former entomologist who's worked at the board for a decade, is now the region's top water pollution cop.

His agency is coordinating the long-stalled cleanup of toxic sediment in San Diego Bay, an effort that it recently scaled back, drawing criticism from those who've advocated for a thorough cleanup of the old pollution from industry and government. It's also been involved in addressing one of the region's longest-standing, largest pollution problems: the litter, dirt and sewage from Mexico that sweeps into the Tijuana River Valley with each winter rainfall, fouling the coastline from Imperial Beach to Coronado.

We sat down to talk about the health of the region's waterways, bay and border pollution and whether he'd eat a fish caught in San Diego Bay.

Why did the board back off on the amount of toxic sediment it's requiring removal of from San Diego Bay?

I don't consider it backing off, I consider it a more surgical approach. When we did a more rigorous analysis, we found that by reducing the footprint we could remove the vast majority of contaminated sediments that were contributing to impairment of San Diego Bay. In other sections of the shipyard the contaminated sediments were buried at significant depth. They're essentially locked up.

As much as eight feet. As long as the area's not dredged and ship traffic doesn't disturb it, that material is safe where it is. We took a rigorous analysis of what it would take to remove the most toxic sediments, where we could be assured of having an actual cleanup, in real-time, in the foreseeable future, without a lot of legal impediments along the way. That's a significant factor. It may not be perfect, but it's certainly protective of water quality.

Most importantly, we don't just check it one time and walk away. There's a monitoring program that the responsible parties will implement. They're charged with diagnosing whether the cleanup has been effective.

If the parties who are responsible for the pollution -- and they're the parties who're also fighting the cleanup effort -- are charged with monitoring their own mess and figuring out whether they've triggered the need for a greater cleanup of their own mess, isn't that a case of the fox watching the henhouse?

It is. However, it's what the law allows us to do. Self-monitoring reports are firmly established in the federal Clean Water Act. We've used them in this region since the 1970s. We've very rarely found deliberate obfuscation in those reports. I suspect the parties simply believe it's legally risky to do that. They may not offer information if we don't ask for it, but the information is submitted under penalty of perjury.

Would you eat a fish caught in the bay today?

I would, but I wouldn't do it very often. And I'd be cautious about what I ate. It's extremely important in this process that we do the socially responsible thing and protect not only the ability of industries on the bay to do business, we also have to ensure that the person who chooses to fish on the bay and eat that fish every single day can do that safely without compromising his or her health.

Does this cleanup do that?

It does that. But it's one part of a bay that has many sites that are contaminated. There are many sites around San Diego Bay that were affected going back to the early 1900s. Those legacy pollutants are difficult and problematic to address, but we have to do it.

Your predecessor, John Robertus, led an effort to deal with some of the trash coming across the border into the Tijuana River Valley. Do you plan to continue? And as a region, can we ever expect that issue to be solved?

Yes and yes. Our agency's long been aware of the issues in the Tijuana River Valley. We took a stand on sewage -- it had afflicted residents for long enough. We also need to address trash and sediment. We can address the symptoms of the problem. We can't change what happens in Mexico. I think in the long run we'll see solutions to those problems. But there's a difference between a problem and a dilemma. You can solve a problem, not a dilemma. The trans-border issue of sediment and trash, the economic disparities, all amount to significant dilemmas. We can't simply solve them -- but we can address them on our side of the border.

Over time, there's certainly been progress addressing border pollution. Beaches in Imperial Beach aren't closed in summer any more. Are there metrics to track success going forward? Not having to do tire cleanups as frequently as volunteers do?

Flood control is one metric. It's a significant problem. Being able to remove certain sediments that have exacerbated flooding is another. Then there's the trash. And anyone who's seen the photographs can see the magnitude -- enormous amounts of plastic debris. Being able to track the reduction over time, and the amount of effort that (Imperial Beach-based environmental group) Wildcoast has to go into to remove it, is another useful metric.

Give San Diego County's water quality a grade. How clean is the water in our streams, waterways and ocean?

That is really the most important question and one of the more difficult ones to answer. The health, what we've been able to find so far, is not very good. It's not what I hoped it would be. When we look at water chemistry in our watersheds, we see a significant amount of impairment. We recently added over 100 water bodies to the list of impaired water bodies. It keeps growing.

Is that a failing grade for the county?

Though there's growing evidence of trace amounts of endocrine disruptors, personal care products and drugs in our ocean and waterways, they're not regulated by the state or federal government. Should they be? Or what questions need to be answered first?

They certainly will be regulated. I think we're probably five to 10 years away from seeing real regulation of those products. But the methods for analysis (of those chemicals) are still under development. It's not a matter of taking a jar of water into the lab and analyzing it. For some of these products, we don't have that analytical method yet to use in a regulatory context.