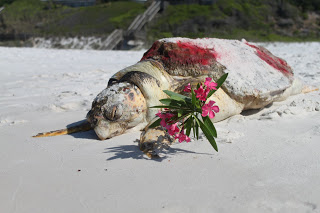 Florida's two top incoming legislative leaders say there will be no discussion of offshore oil drilling in the 2011 session and perhaps for years to come. In addition, Gov. Charlie Crist said Thursday he’d consider calling lawmakers back to put an offshore drilling ban into the Florida Constitution.

Republicans Mike Haridopolos of Merritt Island and Dean Cannon of Winter Park said a Thursday fact-finding flyover of the Gulf of Mexico spill area persuaded them to take the issue off the table until they can be assured Florida won't face a similar threat.

Cannon becomes House Speaker in November when Haridopolos takes over as Senate President. Both were considered to favor offshore drilling before the April 20 rig explosion that caused the spill.

Haridopolos said neither man had seen a spill of such magnitude and said it was sobering for both of them.

While this is great news...two things still remain to be seen:
They have not said they now oppose drilling – this is critical.
They have not ruled out gas drilling next session.