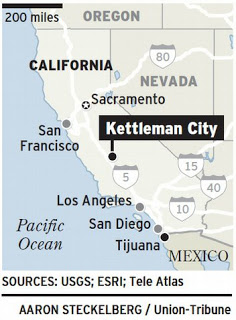 Nearly six years ago, environmentalists and government officials on both sides of the border cheered as cleanup efforts began on the site of Metales y Derivados, a notorious former American-owned lead smelter in Tijuana whose neighbors long had complained of health problems, including birth defects, that they blamed on the toxic-waste site.

As part of an agreement, roughly 2,000 tons of lead-contaminated soil and other waste removed from the site was trucked north to the United States for disposal. As it turns out, some of it wound up in a Central California toxic-waste dump that is now at the center of controversy over a suspected cluster of birth defects in families living nearby.

The waste trucked in from Tijuana, about 20 tons in all, constitutes a minute fraction of the toxic materials deposited in a landfill just outside Kettleman City, an agricultural community off Interstate 5 halfway between Los Angeles and the Bay Area. Still, news of the health concerns there, which have prompted a state investigation, have those who pushed for the cleanup in Tijuana shaking their heads.

“We feel terrible,” said Amelia Simpson, director of the border environmental justice campaign with the Environmental Health Coalition in San Diego, which worked with the U.S. and Mexican governments on the cleanup. “It is another low-income community, and in this case, Latino.”

On Friday, Gov. Arnold Schwarzenegger directed the California Department of Public Health and the state’s Environmental Protection Agency to send experts to Kettleman City to expand their investigation into what could be causing a higher-than-normal percentage of birth defects.

The state health department’s study is under way, with analyses of medical records for birth defects, cancer and asthma and monitoring of drinking water. The probe will include interviews with residents and reviews of soil samples, with initial findings expected to be made public Feb. 9.

According to a health survey that activists conducted in the small town, five of the 20 infants born between September 2007 and November 2008 to Kettleman City residents had a cleft palate or lip, and three of them have died.

“The question is, is there a cluster, and is there an environmental link?” said Al Lundeen, a spokesman for the state health department.

There was never an official study linking birth defects in Tijuana’s Ejido Chilpancingo, a poor residential area, to the adjacent Metales y Derivados site that sat exposed for years, long after the plant was closed.

“People never made a formal complaint because in our community, it is a stigma,” said Magdalena Cerda, a community organizer with the Environmental Health Coalition. “All of the cases we knew of, they kept them a secret.”

Cerda, who worked directly with residents near the Tijuana site, said health problems in the Chilpancingo community included cases of children born with hydrocephalus, an abnormal buildup of cerebrospinal fluid in the brain, and spina bifida, a defect in which the spinal canal and backbone do not close before birth.

Lead poisoning also interferes with development of the central nervous system and can cause learning and behavioral difficulties in children, who are particularly susceptible to the toxin.

Environmental activists have filed suit to stop a planned expansion of the Kettleman City site, which is owned by Chemical Waste Management Inc. and is believed to be the largest toxic-waste dump in the West.

While no one can say with certainty what is causing birth defects there, the director of the San Francisco-based environmental group Greenaction, which is involved in the lawsuit, said more monitoring of the site is needed.

“Monitoring is not what it needs to be, and we think the dump should never be expanded,” said Bradley Angel, executive director of the group.

Helen Herrera, a spokeswoman for Chemical Waste Management, said that the company supports the state’s health study but that there is no evidence linking the site to birth defects.

Metales y Derivados, which recycled vehicle and boat batteries brought in mostly from the United States, operated during the 1980s. The contamination was discovered in the early 1990s; in 1994, owner José Kahn moved to San Diego to avoid arrest after Mexican authorities shut down the business and tried to charge him with breaking environmental laws. Kahn has since died.

For years afterward, the property remained littered with 55-gallon drums and other containers filled with lead waste. More than a decade’s worth of efforts on behalf of environmental organizations on both sides of the border resulted in an agreement between the U.S. Environmental Protection Agency and its Mexican counterpart, Semarnat.

In June 2004, a portion of the waste from Metales y Derivados was sent to Kettleman City, according to a federal EPA report. As part of the binational cleanup deal, because Metales y Derivados was a U.S. company operating in Mexico under the North American Free Trade Agreement, the waste had to be removed to the country of origin. The rest of the roughly 2,000 tons of waste taken from the site and exported north went to a toxic-waste dump in Nevada.

More toxic waste would have been shipped back to the United States had it not been for the cost, said Saul Guzman, an official with Semarnat in Tijuana.

“That was the first solution, but it cost too much money,” Guzman said. “There was enough to move the first 2,000 tons, but there wasn’t enough money and we had to do what was most economically feasible.”

The alternate solution was to entomb an estimated 42,000 tons of remaining contaminated soil and waste beneath a concrete cap; about a year ago, a ceremony was held reopening the 4-acre site for use as a public park. The final cleanup cost was about $2 million, with the federal EPA contributing about $80,000.