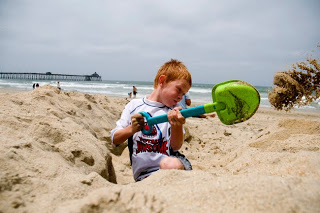 Waiter, There's a Metal Rod in My Sand

By ADRIAN FLORIDO
In 2005, surfers and beachgoers in Imperial Beach noticed that chunks of rock, mangled metal rods and other debris were washing up on the shore.
The problem started, they said, not long after the federal government dumped 250,000 cubic yards of sand near the shoreline of the city's beaches. (That's enough to fill up 12 percent of Qualcomm Stadium.)
The Army Corps of Engineers had dredged the sand from the San Diego Bay floor as part of a project to clear the way for large vessels. The federal agency made an agreement with Imperial Beach to dispose of the sediment near its shores.
The city's beaches are constantly losing sand to erosion, and city officials saw the project as an opportunity to replenish the sand they say is important for attracting tourists. But surfers and environmentalists said the sand was contaminated.
Five years later, the city is gearing up to enter into a similar agreement with the Army Corps to bring as much as 300,000 cubic yards of sand to Imperial Beach. Last month, it asked the Port of San Diego to provide $1.8 million for two sand replenishment projects. It wants to give $1.1 million to the Army Corps of Engineers and $700,000 to a second project planned by the San Diego Association of Governments.
Environmentalists fear contaminated sand might once again be dumped on Imperial Beach and say the city has given them little chance to weigh in on the project's fate.
Greg Wade, the city's community development director, said plans to fund the Army Corps project would depend on several factors, including how much money the city gets from the Port and how the city can best leverage its money to get more sand.
Wade said a plan to keep debris out of dredged sand was not implemented before the Army Corps' earlier project, which may have explained the contamination, but that the city would be more vigilant this time around.
He said the City Council would review the project's environmental assessment and ensure that measures to prevent contamination -- like inspecting the sand on the dredge boat and running it through a grate to filter out debris -- were included in the plans.
The Army Corps' current project will dredge the channel entry to San Diego Bay off the tip of Point Loma, not in the heavily trafficked bay where sediment contamination is more likely.
"The fact that it's in the entrance channel gives me some comfort," Wade said. "The possibility of that type of material in the sediment is less likely."
Those differences provide little comfort to Serge Dedina, a local surfer and executive director of Wildcoast, a nonprofit environmental group based in Imperial Beach. He questions why the city, which is primarily interested in sand, would help pay for a federal project whose main purpose is to clear vessel routes of excess sediment and to dispose of sand as an afterthought.
Scott John, manager for the Army Corps' $1.4 million project, said the dredging does not depend on additional funding from Imperial Beach. But if the city pays for the sand -- giving the Corps more money -- the agency could dredge deeper and lengthen the time before the agency has to return to maintain the area.
"It's common for some of our projects to enter into cost sharing agreements and for other agencies to split the cost of dredging in exchange for the sand," John said.
The agreement would guarantee the sand would be delivered to Imperial Beach instead of another dump site near Coronado.
Without cost-sharing agreements, John said, the Army Corps usually disposes of sand at the nearest available dump site to save on transport costs.
Dedina's concerns are pitted against the cash-strapped city's desire to attract more tourists and generate greater tax revenue. Sand acts as a buffer between battering waves and coastal development and also makes the city's beaches attractive to visitors.
City officials say most of Imperial Beach's sand historically came from sediment that washed in from the mouth of the Tijuana River. But that natural, recurring source was eliminated when the river was dammed. The city has had to find other ways to replenish its beaches from erosion caused by storms and the flow of currents in the area that carry sand from Imperial Beach north toward Coronado.
"We basically have been fighting for every project," said Imperial Beach Mayor Jim Janney. "I'm sorry, but we're basically asking for anything. The real goal, in my opinion, is to maintain Imperial Beach as a viable area. This is called opportunistic sand."
Dedina said he was concerned that the decision to ask the Port for money for sand should have been more open and allowed more opportunity for public input. It is especially important, he said, for groups like his that want to protect coastal wildlife and have a serious stake in how sand replenishment projects are carried out.
Janney acknowledged that the decision to ask the Port for money was made during a private conversation with Port Commissioner Mike Bixler and City Manager Gary Brown. But he said they had the city's best economic interests in mind.
"We had to keep this on the radar screen," he said. "It was dropping below their cutoff line for available money and we wanted to reiterate the desire to bring material to Imperial Beach."
He said he and other City Council members would not allow the Army Corps to bring contaminated sand to Imperial Beach.
"From everything I've been told, the material that's in the dredge, that material is extremely good sand," he said.
But he said he also had a responsibility to jump at any opportunity to secure increasingly scarce funding for sand replenishment.
"I would hate it to come about that people say we never advocated for the money," Janney said.
Please contact Adrian Florido directly at adrian.florido@voiceofsandiego.org and follow him on Twitter: twitter.com/adrianflorido.