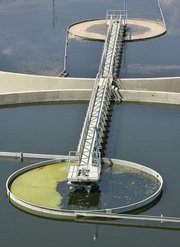 Some of the treated water leaving the Monte
de los Olivos plant in Tijuana is used for irrigation
as part of Mexico's conservation plans.

470,000 gallons of wastewater treated at the new Arturo Herrera Plant are used daily to irrigate landscaping at Morelos Park.

Next year, officials plan to extend an 18-inch pipe to irrigate green spaces in the Rio Zone along the Tijuana River channel.

Plans call for building a pump station and pipeline in 2011 to carry water to the Mesa de Otay district for use in landscaping and industry.

Baja California is studying the possibility of piping the water to supply vineyards in the Guadalupe Valley.

The Purple Project results from upgrades to Tijuana's sewage system, which have opened new possibilities for reuse and are expected to lead to cleaner beaches on both sides of the U.S.-Mexico border.