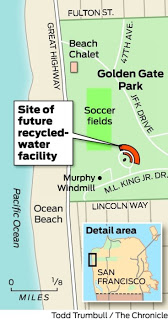 Today, San Francisco's water utility will unveil a proposal for the city's first large-scale water recycling project, an arc-shaped facility near Ocean Beach that would filter and disinfect 2 million gallons of sewer and storm water each day for use on 1,000 acres of San Francisco land.

As proposed, the Westside project would take treated wastewater from the Oceanside Water Pollution Control Plant near San Francisco Zoo, run it through fine membranes and ultraviolet-light systems, and spread it through the network of existing pipes and sprinklers snaking through the parks. The water could also serve to flush toilets at the California Academy of Sciences.