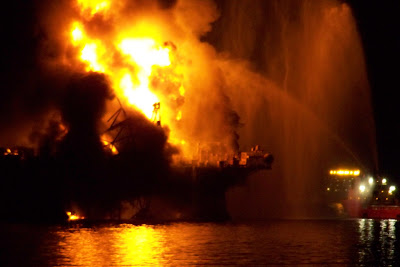 NOAA is responding to an explosion and fire on a deepwater semisubmersible drilling platform some 50 miles SE of the Mississippi Delta. The incident on the DEEPWATER HORIZON occurred at approximately 11:00 PM on 20 April with more than 120 crew reported aboard. The rig caught fire and has been evacuated. USCG Search and Rescue operations have been initiated. A secondary concern is the estimated 27,800 bbls (over a million gallons) of #2 Fuel Oil or Marine Diesel Fuel reported onboard. The USCG has requested scientific support from NOAA’s Office of Response and Restoration. NOAA is running oil spill trajectory models of potential spilled oil. A NOAA Scientific Support Coordinator is on-scene in Morgan City, LA. The NOAA Weather Service is providing forecasting support. Additional information may be available at Incident News (www.incidentnews.gov)and NOAA’s Office of Response and Restoration (www.response.restoration.noaa.gov). Also see NOAA’s role and tools used during an oil spill at www.response.restoration.noaa.gov