Why Iceplant Is Not Good For Slopes 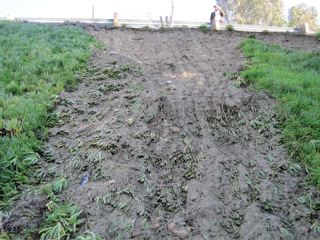 This photo was recently posted to the California Native Plant Society listserve with the following note:”Here’s an area previously covered with iceplant. During rainstorms, iceplant notoriously inflates like a water balloon, the extra weight pulls the loosened soil down the hill with it, causing a mudslide. This mudslide traveled more than 100 feet down the hill. A few more of these, and the city will be replacing the guardrail, sidewalk, and street. West-facing slope of 30th Street, north of Laurel. BTW, no mudslides were noted on the same slope in the area renovated with native plants, directly north of here……”

Iceplant, while considered drought tolerant, is a bad choice for slopes and bluffs because not only does it actually contribute to erosion but it is non-native and invasive.  For slopes and bluffs consider native alternatives that have a deep root system such as Iva haysiana “San Diego Marsh Elder” or Baccharis Pigeon Point “Dwarf Coyote Bush”  both of which are fire resistant as well!